Start a Wiki
Lolly Pinkington is a pig whom Baa Baa Lou falls in love with in Secret Cupet. She is not named in the series, but her name is given by merchandise.[1]

Lolly was first seen walking with her owner at the park, when they crossed with Baa Baa Lou and his owner, who were on their way to Littlest Pet Shop. Baa Baa Lou did not even notice her at first, but then he heard the Secret Cupid's music, which made him look at Lolly again and fall in love, to the point of dragging his owner just so he could be close to her. She seemed to respond positively to his affection, smiling back at him. About 5 minutes later, Baa Baa Lou shared the story of their meeting with the day campers.

In October 2014, a Lolly Pinkington toy with the ID #3744 became available on Hasbro's website. This toy is the source of her name. 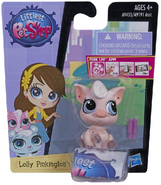 Retrieved from "https://lps2012.fandom.com/wiki/Lolly_Pinkington?oldid=61272"
Community content is available under CC-BY-SA unless otherwise noted.