"And to get O.B.'s "lotsa luck" in person, it's the ultimate showbiz seal of approval."
—Pepper Clark

Lotsa Luck is the twenty-second episode of the first season of Littlest Pet Shop.

Blythe and Zoe watch Pepper as she digs through her comedy prop items. As they begin to walk away, Zoe asks if anyone special will be coming to Littlest Pet Shop soon and Blythe checks a list to find someone named "O.B." is coming, which apparently stands for "Old Bananas," as revealed by an ecstatic Pepper.

Pepper reveals to them that Old Bananas is a big pet comedian who had his own show at one point. She is his biggest fan and wonders if maybe he is coming to see her comedy routine. She also tells them she has learned everything from him and asks Blythe to come and see her performance for him before she leaves. Zoe begins to ask Pepper if she thinks O.B. would really like her act, which makes her worry for a moment.

Blythe heads into the storage room to look for the hammock Pepper asked her to retrieve. She begins to dust the room and finds a strange chest. She checks to find a strange picture of a girl named Anna T and realizes it is Mrs. Twombly.

As Pepper continues to work on setting up her act, Russell tries to make her see what is wrong with her idea. However, Pepper will not hear of it, thinking this is the approval she needs since it means she really is a great comedian with it.

Out in front, O.B. happens to arrive with his owner. He follows Penny Ling to the playroom while she chats about Pepper with him.

Meanwhile, in the playroom, Pepper has been trying to put on a routine for the other pets, but they fail to find it amusing. Unbeknownst to Pepper, O.B. also watched and makes his presence known to everyone. Pepper begins to worry as he criticizes her performance, but she tries to tell him she was only rehearsing in hopes of not having him think badly of her yet. He shows everyone a few tricks and tells a couple of jokes after handing them some autographed pictures and goes to lay down while the others hang out with him.

At home, Blythe is showing Youngmee what she was able to find involving Mrs. Twombly. They look up what kung fu quilting is and find a picture of her, revealing that not only was she a champion at it, but was also the one who originated it. However, Blythe notes that Mrs. Twombly never mentioned this before and decides to print out a picture to show her in hopes of getting some answers.

By now, Pepper is starting to get upset. Old Bananas does not like anything she has tried to do yet and she starts to think he is not even worth it since he does not find her funny. Russell tries to once again tell her he is not really like how he was on television, but since Pepper does not get it, he tells her to just try to make him laugh like she would anyone else. This seems to work, but Pepper now wants him to help her out, which he does not really agree to.

Blythe goes to visit Mrs. Twombly to talk about kung fu quilting. She shows her the pictures, but Mrs. Twombly seems to be rather annoyed about it. She claims it is not a big deal and tells Blythe to forget it before storming off. Blythe cannot understand what the problem is and observes the pictures again.

Once again, Pepper tries to perform for Old Bananas, but he ends up falling asleep. Russell tells Pepper not to bother, but Pepper thinks she has to keep up doing what he wants, even if it is a little questionable.

Blythe runs outside while Mrs. Twombly cleans. She asks her how she did it and Mrs. Twombly explains that at one point when she was younger, she had been having some stomach problems. She was so bored and took up quilting, but remained bored and took up to watching kung fu movies and just put the moves she learned into her quilting. Blythe is impressed by this and what she can still do now, but Mrs. Twombly claims that what she can do now was nothing like what she used to be able to do. Blythe asks her why she quit and Mrs. Twombly explains that she soon just had to keep quilting against others until she got an injury and decided to retire. Her retiring had such an effect that no one ever wanted to think about kung fu quilting again.

In the playroom, Pepper begins her act. The first one fails, but she is not shaken by this because she has at least 96 more tricks to show off. After so many attempts, she realizes nothing worked and becomes depressed over it.

Blythe goes to see Mrs. Twombly again. She asks her how she was able to give up kung fu quilting so easily, but Mrs. Twombly claims she felt a lot better after opening Littlest Pet Shop. She may have been famous, but has done it already and was not even happy back then. However, Blythe still does not understand and tells her she is sure she and her friends would have loved to have learned it. Realizing how late she is though, Blythe runs into the playroom to see how Pepper is doing.

By now, Pepper has gone through everything with no success. However, upon seeing Blythe there, she tries one final thing: She pretends to act like someone with a bad itch and is finally able to get everyone in the room laughing. Except for Old Bananas until she ends up tripping on a banana peel and all of her items ends up falling onto him. He laughs while everyone cheers and compliments Pepper on a job well done. He explains to her that he was only testing her because as a comedian, she would have to deal with the critic that may never find her amusing. He then thanks her for a job well done, then begins to tease her before seeing his caretaker. Before he goes, he gives her his signature "Lotsa Luck" gesture. When asked how she feels finally getting his approval, she claims it was okay, but actually was just happy that they liked it more.

In the Pet Shop, Blythe, Youngmee, Sue, and Jasper are each wearing a kung fu uniform and Mrs. Twombly begins to teach them the basics of kung fu quilting.

Pepper: I'm gonna get his thumbs up, "lotsa luck," and then the world will be my toaster.
Russell: I think you mean oyster.
Pepper: No, I can't stand seafood.

"Guys, it's a joke. It's not a philosophical discussion."
—Pepper 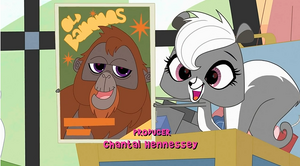