Lucky Browne is a recurring character in the series. She is not named in the series, but her name is used in merchandise. She is a brownish cat with lighter fuzz on her head, neck, tail and around her blue eyes. She wears a green necklace.

Even before there was a toy of her, she appeared on the "The Bobble is Back!" advertisement along with other characters, to advertise new toys with bobble heads.

In February 2014, a toy of her was shown at Toy Fair 2014 as part of the Franchise Re-Invention. She is bundled with Lefty Silverstein in the We Love to Party! themed pack, which is the source of her name. 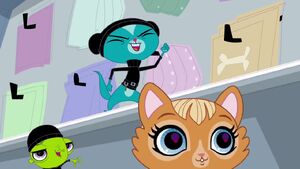