Madame Pom is a pomeranian who stayed at the Littlest Pet Shop's daycare in Eve of Destruction. She is Zoe's rival. The toyline gives her name as Madame Pom LeBlanc.[1]

Zoe and Madame Pom once competed for a dog modelling show. Much to Zoe's dismay, Pom won.

When Pom arrived at the Littlest Pet Shop, she and Zoe began sniping at each other, throwing out insults and snide comments, culminating in a modelling contest. In the end, Zoe admitted that she had taken losing badly, and Pom admitted that she admired Zoe's skills.

She appeared again in To Paris With Zoe, in which she competes in the Paris dog show with Zoe.

Madame Pom was the first Littlest Pet Shop character designed by Kora Kosicka, who claimed "she made it through pretty much intact (save for a few color and marking changes)", which include her eyes having changed from green to blue, her eyeshadow and her necklace's colors.

The original concept for Madame Pom’s character in Eve of Destruction was posted on Kora Kosicka's Tumblr around the period of the episode's airdate, but it's been since deleted. The image also included Madame Pom with sunglasses and Madame Pom with a dog treat in a cigarette holder.

Madame Pom generally seems nice to everyone, complimenting them if they have done well or pleased her. However, she is a bit snobby and tends to be too self-focused and narcissistic, especially when she deals with a rival, like Zoe. Fortunately, she keeps her wisdom and does not jump to conclusions as shown in To Paris With Zoe.

Madame Pom is a tan-peach Pomeranian with a pale facial marking and creamy-pink tail, neck fur, and inner ears. She has a small amount of bright brown hair. Her eyes are deep blue-teal, matching her blue eye shadow. Like Zoe, she has a beauty mark near her lower lip, though Pom's is further away then Zoe's. She wears a neon pink-purple and blue gem necklace.

For the model-off with Zoe, Madame Pom wore a sparkling dark pink dress with her necklace, pearl clips by her ears, and dark purple straps. During her appearance in Paris, Madame Pom was also shown wearing a purple dress with print on it, a black furry / feathery neck piece, and a gold, beaded head piece with cyan feathers.

In February 2014, a toy of her was shown at Toy Fair 2014 as part of the Franchise Re-Invention. She comes - under the name Madame Pom LeBlanc - bundled with the little kitty Paprika Price in the Pet Pawsabilities assortment.

In summer 2015, a toy set called Birthday Surprise was released, including Madame Pom LeBlanc, Zoe Trent, Buttercream Sunday, Penny Ling, and Pepper Clark. However, it featured the same figure as the re-invention. 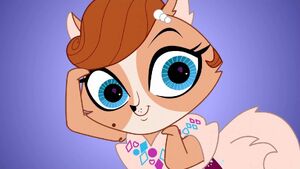