"Now, back to my hat..."
—McKenna Nicole, Missing Blythe

McKenna Nicole is a girl who loves fashion. She attended Fashion University North during summer, staying in the "Sew-What" student dorm with Blythe.

Hats are McKenna's favorite fashion accessory, and she has some trouble choosing which one to wear, because they all look great for her. She frowned a bit upon Blythe talking so much to the pets through computer.

When the FUN students were shocked by Blythe suggesting them to take a break from fashion, McKenna made the situation calm again by saying Blythe was being funny as always.

She appeared again in Snipmates as she is revealed to be a contestant. During the episode McKeena has been trying to sabotage Blythe's chances of winning such as stealing her fabric, switching marshmallow with sugar free and ruining her pilot uniform. She was tricked by the Biskit Twins to make her own outfit for Mona Autumn, making her lose the final challenge. 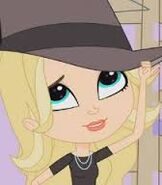