Mean Isn't Your Color is the sixth episode of the first season of Littlest Pet Shop.

Blythe struggles with the fact her father has a date for the People Pampering Pets Charity Ball. Meanwhile, Penny Ling gets upset and has trouble dealing with the outfit Blythe made for her as the other pets try to calm her down.

Blythe is at Littlest Pet Shop when Mrs. Twombly arrives with some bags she got from shopping earlier. She reveals she got a bunch of doorknobs for her collection, as well as an ugly fancy dress, a buffo hat, and tickets to the upcoming People Pampering Pets Charity Ball, enough for her, Blythe, and the pets. As Blythe goes to tell the pets, Mrs. Twombly decides she will go ahead and take a nap for now. So Blythe tells the pets and they excitedly start to consider all of the wonderful things that will happen that night. Penny Ling seems the most excited, imagining popularity, the adorable dress she will be in. After snapping out of it, she says farewell to Blythe with the rest of the pets.

In her bedroom, Blythe is working on designing the pets their outfits for the event with Youngmee. Roger comes in and mentions he has been given tickets to the event and wanted to see if Blythe would give his suit an update. Roger brings it back and before leaving the room, he mentions he has a date, much to Blythe's chagrin and shock. Youngmee goes through a list, hoping to calm Blythe down. As she does, Blythe starts to draw her father's suit, unaware she is using the same page she had been using to draw Penny Ling's outfit on. Blythe claims she is okay with this going on, but she clearly is not.

Meanwhile, Penny is still happy about the turn of events and begins to imagine herself dressed up for the event. She accidentally causes a small argument between Zoe and Minka over which color would look better on her, but when Pepper calls them out on this, Zoe suggests they ask Blythe for her own opinion – after clarifying she had really been talking about herself to begin with.

Blythe is angrily brushing her hair while berating herself over the fact her father is dating now. She thinks it is her fault since she ignored him and never showed interest in the things he likes or enjoys. Youngmee tries to talk her out of this, but it does not seem to work, so she warns her she is currently in stage two of this process before they end their chat. The girls (except Pepper) enter Blythe's room and ask to see what she has made for them so far. Blythe agrees, but warns them they have to do it quickly because she has to leave for school. As they overlook the designs, Zoe and Minka happily comment on their own. However, to Penny Ling's shock, she sees her design for a moment before Blythe grabs the notebook and leaves.

During lunch at school, Blythe angrily vents to her friends while continuing to berate herself for being a lousy daughter. They try to understand, but do not really see the big deal until she starts to silently fume after Youngmee points out she has gone into stage three, then four. The three of them quickly flee before Blythe can start to yell at them. Upon realizing they fled, Blythe breaks down and cries instead.

Meanwhile, Penny Ling continues to angrily deal with everyone as they go on about their outfits and what-not until she finally snaps and has a freak-out. The pets watch her curiously as Minka bluntly tries to tell her to calm down and be polite as she normally is, but it is no use. Penny angrily and carelessly starts to make a mess and destroy things in the room.

At home, Blythe is in the middle of sewing her father's updated suit when he comes in with a snack. Blythe invites him in to discuss his date, but he only comes in for a minute before leaving again. As he does, Blythe quickly eats her snack and notices Youngmee has sent her an instant message, so they start to talk over the webcam. She angrily begins to plan putting a prank flower on her father's suit; however, after Youngmee starts to laugh about it, Blythe starts to see how funny it is and also starts to laugh before admitting she is wrong and that her father deserves to be happy. Youngmee congratulates her on making it to stage five.

Back at Littlest Pet Shop, Penny Ling overlooks herself in the mirror while trying to practice how she can nicely tell Blythe how she feels regarding the outfit. After practicing a few times, she decides to immediately visit Blythe to tell her the truth. However, when she arrives to the bedroom, Blythe is gone, having gone to meet Youngmee at her front door. Penny chooses to check out the suit and tries to try it on after climbing in it. However, as she tries to escape from the suit, she accidentally rips one of the sleeves and quickly runs to hide, worried that everyone will think she intentionally ripped it.

It is then Blythe and Youngmee return to see the giant ripped sleeve. She insists she had not done it, but Youngmee does not believe her.

As Penny Ling returns, she sees the other pets surrounding her. They want to discuss her sour mood, but she does not want to. They try to guess why she is so angered, but none of them are right – until she finally breaks down and informs them she hates the outfit Blythe made for her. None of them see why it is so bad until Penny mentions she just cannot tell people bad things because then she (and the person) will feel bad. Russell and the others agree to help Penny and they return to Blythe's room. She reveals their outfits to them and has the pets try them on.

After they momentarily model them, she sees Penny is not there. Zoe reveals that Penny hated the outfit Blythe made for her, to which Blythe pulls a cute pink dress from a hanger and reacts negatively. She thought Penny would love it. Much to everyone's shock, they question this. When they bring up the over-sized man suit, Blythe finally realizes what happened: She accidentally drew her father's suit on the page she was drawing for Penny Ling's dress.

Blythe goes to find Penny and tell her what happened. Blythe finds her outside on the roof, relaxing on a chair. Before Blythe can explain what happened, Penny manages to reveal how much she hates the suit Blythe made for her. Blythe then reveals the real dress she made for her and apologizes for being so wrapped up in her own thoughts to even notice the mistake. She also tells Penny she should have told her sooner. It is then her father finds her and he compliments the wonderful suit she has made for him. He then reveals he had planned to have Blythe serve as his date and she realizes she should have told him how she felt sooner and that she should have never assumed anything before happily embracing him.

The two of them walk away and Roger mentions to Blythe that Mrs. Twombly picked a dress for Blythe to wear, which is actually the awful dress from earlier. Blythe cringes as she and Roger walk off screen and the scene fades to black.

Blythe: Give it up, Dad. Reverse psychology doesn't work on her. Neither does normal psychology. She's "different."
Youngmee: I prefer the term "special."

"I HAVE A DAD WHO SAYS TOODLES!"
—Blythe 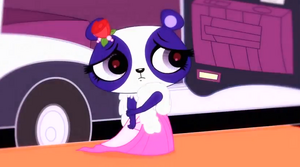