Meow-Meow is a kitten who appears in Room Enough. The toyline gives his name as Meow Meow Milkone.

Mrs. Twombly brings him into the day camp and Russell welcomes him. Sunil says he tell them what he wants to do, he ask why. When Russell says no one is ever asked that before he ask why again. Zoe asks him about fashion he just says why, Zoe gets fed up, so she gives him to Pepper, hoping she will connect better. Pepper tells him numerous jokes, but he still asks why. Vinnie asks if he is wondering how he polishes his dance moves, Meow-Meow asks why. Vinnie get stressed when Meow-Meow asks him why numerous times. He yells out where is Blythe because she would how handle Meow-Meow, but no one has seen her all day.

Penny Ling says no day is complete without Blythe and Meow-Meow ask why. Penny Ling tells him that Blythe is the only one who can understand them. When Meow-Meow ask why Penny says she is not sure. Zoe says it might be because of Blythe's big head Sunil says she has super cranial structure. Russell says Meow-Meow asked very important question of how Blythe can understand pets. He listens to Sunil, Vinnie, and Minka's theories about how Blythe can talk to animals.

Penny Ling discover that Meow-Meow's disappeared. They look for him all over, but discover he is climbed up the dumbwaiter to ask Blythe himself and is stuck. The pets shout up to Blythe, but she is wearing headphones. Minka climbs up to get him because she's a monkey, but remembers she is claustrophobic, so she run runs back out.

Sunil and Vinnie try to run up to Blythe's apartment to tell her about Meow-Meow, but they are taken back to the shop by Roger when they reach the door. 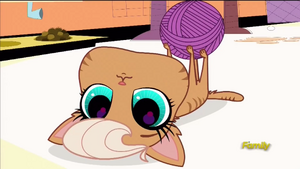