Minka Mark is a female pink spider monkey with a talent for abstract art and is one of the main characters of Littlest Pet Shop. She is energetic and hyperactive and known to be a chatterbox. She can also easily be distracted by things like food, shiny objects, or simply swinging on a tire swing.

In Grounded, during a DNA test, it is initially included that she is a rare breed of monkey called a "Minkey". This conclusion is negated later when it turns out her test results got mixed up with Zoe's and that she is a normal kind of monkey (albeit a pink one).

Minka is a peppy little monkey, as well as being extremely hyperactive.

She loves to spends her days painting and chatting it up, or searching someone's head for food while they speak to her. Presumably because she is a monkey, she just can't help but be distracted by even the simplest of things. Though it could also just be because she's too hyper to pay attention to one thing for a long amount of time.

Her passion lies in art, but not just any art: Abstract. There is nothing she likes more then just grabbing a few cans of paint and throwing it around at anything nearby, be it a canvas or a window.

It has been revealed that she cannot work under stress or pressure; when she realized that by selling her art and that it would no longer be fun, she went through a small meltdown that took an apology from Russell to make her feel better and resume painting.

In Dumb Dumbwaiter, it is revealed that she is highly claustrophobic when trapped in the dumbwaiter stating that she was a "space monkey" and went as far as screaming when in panic.

Minka Mark was designed by Hasbro designer Kirsten Ulve in 2011.[1] One of her original illustrations shows Minka had a white muzzle, no lighter fur around her eyes, wore a blue skirt and a blue ribbon at the tip of her tail. Despite it not being present in the show, she still wears her blue skirt in the toyline.

The bonus "A Look Behind The Pet Shop Doors" featurette from the DVD "Little Pets, Big Adventures" revealed that, prior to January 2012, she was named "Margo".[2]

According to Julie McNally Cahill, "very early on", her last name was "Marx".[3]

She is a pink monkey with a long and lanky body with a bit of a tummy. Her tail is very long and curly and it seems to be a little bit darker then her skin/fur. Her eyes are bright blue in color. Her hair is a very pale shade of pink with few bangs right directly above her eye, while the rest of it is worn in pigtails at the top of her head, held with small blue bubble shaped pieces.

As a main character, Minka has appeared in the toyline multiple times in many sets. 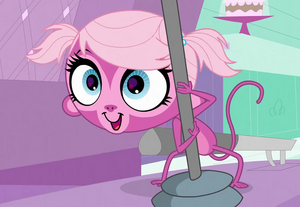