"We can't keep this up. We've gotta get Mrs. Twombly to take us to see Blythe, right away."
—Russell

Missing Blythe is the first episode of the second season of Littlest Pet Shop and the twenty-seventh episode overall.

The pets at Littlest Pet Shop come up with a plan to visit Blythe while she is away at fashion camp for the summer.

Blythe is introducing the Fashion University North campus, her roommate, and her dormitory at the Sew-What student dorm. Blythe is chatting with her father on her laptop and inquires if everything is okay. Her father assures her that everything is fine, but in the background, the toaster is on fire and soon, the smoke detector goes off and the kitchen is filled with smoke. Blythe still worries, though her father says he just needs to change the smoke detector's batteries. Meanwhile, in their apartment, her father vows not to let another toaster go up in flames.

The scene changes to Littlest Pet Shop, where the pets are feeling lonely without Blythe. Sunil asks if anyone remembers the inspiring words Blythe spoke during their rescue mission at Largest Ever Pet Shop and Zoe remarks that it was a brilliant caper mission made all the better because Blythe was with them. Sunil admits he actually has trouble remembering those words. Russell puts in that 'at least they still have Madison', and at that moment Madison enters the day camp area wearing an oxygen mask and gloves, carrying the two bowls of pet food for the day campers. Pepper replies sarcastically that Madison sure is a party. Penny Ling then exclaims that is time for Blythe's daily check-in with them through the web-cam Mrs. Twombly installed. Minka, though, finds it a pity that only Blythe can see them, and neither party can hear each other.

Back at Blythe's dorm, McKenna is asking her if she looks better in a floppy hat or a fedora, which to Blythe answers that she looks great in both. McKenna complains that she knows, and that is why it is so hard for her to decide which to wear. She then proclaims she will wear the fedora and asks if Blythe is ready to leave. Blythe tells her to go ahead first, as she has something to check on her laptop. After McKenna leaves, she checks in with the pets, who respond happily by playing around. McKenna opens the door and inquires in Blythe is talking to the pets again, which implies she has probably heard or seen Blythe doing so several times. She adds that the pets cannot understand her, and Blythe plays along as McKenna pulls her along for class.

At LIttlest Pet Shop, the pets are still playing happily and Russell notices that the web-cam is off. He reminds the pets and everyone stops instantly, tired from putting on a happy front. It turns out they are not happy at all without Blythe, but none of them want her to worry while she is away at fashion camp, so they pretend to be just fine. Russell is unsure if they can keep up with the charade, and Vinnie implies he does not even know what a charade is, but agrees that they cannot keep up the happy front. Just then, they hear a honk from in front of the shop and run to the display window to watch Mrs. Twombly shining the Littlest Pet Shuttle, which she will use to pick up pets for the day camp.

Meanwhile, Blythe comes out of the student dorm and breaks into a song about the university. However, near the end of the song, she admits that fashion can sometimes be a bore, as she sits in the middle of a lecture. The teacher asks a question but no one answers and he just gives the answer directly, showing the students are not quite responsive.

On the other hand, Mrs. Twombly has noticed the pets at the display window and seems pretty excited about the shuttle. She explains the purpose of the shuttle and Russell comes up with a brilliant plan. Pepper does not understand why, and the pets realise that in order to see Blythe, all they have to do is to send a pick-up request to Mrs. Twombly to Fashion University North, and include a reason why the other day camp pets should come along. However, Vinnie is baffled, having poured his drinking water into his ear earlier.

The next day, when Blythe checks in on the web-cam, the pets are shown hiding behind it, trying to avoid the camera. However, Vinnie, who is near the bottom, says that Sunil knocked the drinking water out of his ear while climbing up on top of him, and scratches his ear until the whole tower falls. However, the puzzled Blythe has already cut off the connection, seeing none of the pets during her check-in.

At F.U.N., McKenna is explaining why hats are her favorite fashion accessory, and Blythe is bored, while the other students seem very interested. Blythe suggests that they do something unrelated to fashion and take a break, but the others are all horrified that she came up with such an idea. Thankfully, McKenna manages to get her out of the sticky situation by saying that Blythe is too funny, which makes the others think that Blythe is funny, due to her influential nature.

Back in Downtown City, Russell, Pepper and Sunil are in Blythe's bedroom, using her computer to fill in the pick-up request. However, Sunil and Pepper request that Russell add that there is a funny skunk and handsome mongoose at the day camp, leading to his frustration. Once done, Sunil remarks it is amazing Russell could type so quickly with his tiny paws and Russell is annoyed.

Blythe is having a lesson back at the university and is tasked to design something that has both form and function. She has designed a backpack which you can place a pet inside, something which she came up with before. The teacher is impressed and pleased with Blythe's idea. McKenna asks Blythe for her help since she is done, but Blythe requests to make a phone call first. She calls Littlest Pet Shop and Madison picks up as Mrs. Twombly is outside shining the shuttle. Blythe asks about Mrs. Twombly and the pets, but Madison does not give her much of an answer. The computer beeps, having received Russell's fake pick-up request and Madison puts down the phone, much to Blythe's annoyance.

At LPS, the pets watch Madison read and print out the pick-up request to F.U.N. and Mrs. Twombly is pleased that her first request is at the university as she can see Blythe as well. She reads the special instructions and decides to bring along all the pets, as the form requests that she bring along other pets to calm the pick-up. The pets are overjoyed that their plan has worked.

Blythe is at her student dorm when an announcement is made about a trip to Downtown City for homesick students. Blythe is excited and signs up immediately, exclaiming that she is going home!

Back at the day camp, the pets are partying about seeing Blythe. Mrs. Twombly buckles them up at the backseat of the shuttle and drives off for F.U.N.

The bus for the trip to Downtown City is leaving and McKenna asks Blythe about her opinion on her hats and Blythe gives the same reply as she waves, leaving for her home.

Mrs. Twombly misinterprets the pets' calls as a request for her to sing and she happily does so, but the pets are not so happy to hear her song...

On the bus, Blythe is listening to a song but falls asleep into a nightmare about the fashion university and sings a reprise of the F.U.N. Song. She wakes up and screams that "the plaid monster is going to get her". The other students stare back at her, baffled, and she pretends that it was merely the lyrics to the song playing on her headphones.

Back on the shuttle, the pets are dead sick from listening to Mrs. Twombly's singing. Just when they think she is done, Mrs. Twombly starts the song again, much to their frustration. Zoe spies a shop along the road and barks, getting Mrs. Twombly to stop at the shop to let them stretch their legs and "plug their ears". The bus from F.U.N. pulls up at the parking lot first, followed by a long truck which blocks the bus from view. The shuttle then pulls up next to the truck. Neither Blythe nor Mrs. Twombly and the pets realize that they are in the same shop. Blythe purchases a magazine just as Mrs. Twombly walks in with the pets and the shopkeeper gives her a weird look. Blythe turns to look but Mrs. Twombly and the pets disappear down the aisle, so she dismisses it and leaves. The bus leaves for Downtown City once more.

At the airport, Roger alights from a flight and exclaims he is going to see Blythe at fashion camp.

Blythe returns to Littlest Pet Shop and asks Madison where Mrs. Twombly is. She also checks on the pets but realizes that they are gone. She checks with Madison and finds out that they had gone off to F.U.N. to give her a surprise.

Mrs. Twombly and the pets arrive at F.U.N., but she finds out she has been tricked when she speaks with the security guard. She then asks to see Blythe, but before the guard can answer, Roger comes in and tells Mrs. Twombly that Blythe had left for Downtown City to surprise them. They decide to drive back to Littlest Pet Shop to look for Blythe, but this time, Roger drives the shuttle and instead, he tells stories about Blythe, which bores the pets once again.

Meanwhile, Blythe has gone over to Sweet Delights and goes off in the Sweet Delights truck with Youngmee and Aunt Christie. They sing a different version of Mrs. Twombly's song on the way to the campus. However, Youngmee desperately needs to use the bathroom and sees a shop and asks to stop by. The truck and the Littlest Pet Shuttle nearly collide into each other as they park. Blythe and her dad come out of their respective vehicles and reunite. The pets, Youngmee, and Aunt Christie happily join in. 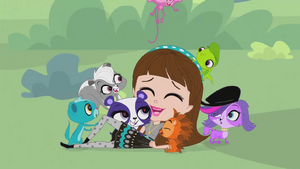