The usage of this template is under question. You can help by leaving your opinion on it here. Thank you.
In order for the quote to show correctly, you need to have Brush Script MT installed.

Mitzi is a skunk who appears in Sue Syndrome.

She was dropped off in the Day Camp Area by Blythe. She meets the pets and gives off a nice scent. The pets love her scent and get excited around. She tells Zoe, Minka, and Penny that her signature scent makes everyone delirious. Minka asks her if she can make custom scents and she says yes. She can make any scent that anyone wants. They ask for a field with lilacs, orchids, and jasmines. She gives the scent to the girls and they enjoy it. The boys want to make a request to her. They ask for the beach with salt water, the sun, and a veggie dog. She gives the boys the scent and they enjoy it a lot. She sees Pepper walk away and feels sorry for her.

When Pepper wants to tell another joke, the pets reluctantly stay and Mitzi walks away. The pets walk away to ask Mitzi if she can make smell fresh, ignoring Pepper. Pepper gets really mad and gives off a bad smell. The pets choke on the smell and beg Mitzi for a nice scent. Mitzi looks at Pepper being sad, feeling bad for her. The pets pleadingly ask her another scent to be happy and she reluctantly gives them one. She says it's Georgia Peach.

Mitzi stumbles into Pepper and tells her how much she envy's her. Pepper is confused and asks why. When she is about to explain, Penny interrupts and begs for more scents as the pets chant "WE WANT MORE!". The two sing a song, and Pepper understands how she feels. She then runs off, feeling pressured by Minka. The pets suggest that she makes "color scents", but it gets overshadowed by Pepper's scent as she tries to prove a point. The pets walk away and Pepper explains how she releases her skunk emotions.

Zoe kindly reminds her about what she was going to do, but Mitzi proudly rejects and gives a bad smell. She announces that she is officially taking a break from taking pet's requests. After the pets, most noticeably Russell apologizes, Mitzi accepts. While talking to Pepper, she lets out a Rose Garden, but Pepper says it is not finished yet without some Peppermint mixed in.

Mitzi is friendly and polite. When overwhelmed, she becomes worried and tired in denial. She likes making people happy, to the point where she is not making herself happy.

Mitzi was released in the toyline sometime in 2016 in a Suprise Families set with a family of 4 skunks and a kitten,released with the name of Skyla L'Aroma. 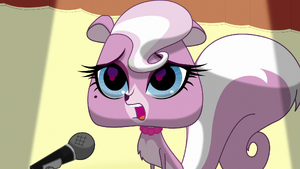 Retrieved from "https://lps2012.fandom.com/wiki/Mitzi?oldid=56320"
Community content is available under CC-BY-SA unless otherwise noted.