In her debut in The Sister Story, Mo is shown to be a sucker for competition, which bothers Roger into joining her in outdoing each other, much to Blythe's dismay and humiliation. When Mo sees the error of her ways when Roger rides through town on a llama, she eases up on the competitive spirit, only for it to return.

Mo is friendly and outgoing. She is known to be very competitive, something that bothers Roger into competing against her. Despite this, the two deeply love and care for each other. 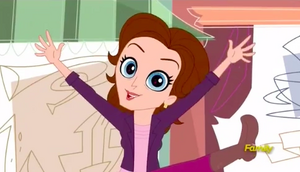