Minka is getting ready to paint a picture for Blythe's kiosk. She had set a giant canvas in the Littlest Pet Shop's day camp and brought 5 buckets of paint. As she starts to shoot the paint at the canvas, all of a sudden, the images start to take form and coming to life. Excited by what she saw, Minka brought the entire jungle to life and even created a monkey. As soon as the monkey appeared, he saw Minka's lunch, which was a banana. He immediately jumped out of the picture and grabbed the banana, before returning to his branch on the drawn tree. That made Minka go chase him into the world of a picture in order to return her lunch. However, the drawn monkey was not going to give up easily – he quickly ran away, skillfully avoiding the shots of paint Minka threw at him. Each shot of paint turned into something new: a yellow-and-blue tree, the green upper branches, a yellow lion, a red elephant. However, none of it helped Minka catch the monkey, some of the new objects even prevented her from doing so. After she was completely out of branch, the monkey came near and shared the banana with her. That made her really happy – until she heard Russell's cough. The cough that brought her back to the reality, only for her to find out that the entire day camp area was now painted, along with all the day camped. She had no other option but to give a sheepish smile and offer her banana as a compensation. 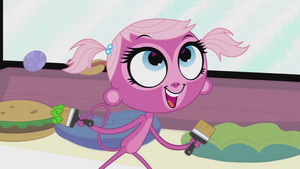