Morgan Payne is an art critic who only appeared in Bad Hair Day.

In Bad Hair Day, Morgan took Genghis to Littlest Pet Shop after seeing a dreadful exhibit at the city museum. While at the shop, Morgan spotted Minka's artwork and said that it was an artistic masterpiece, causing the pets to swarm Minka with aspirations of fame.

Morgan Payne: Ah. Dismal as always, Twombly. Being a world-famous art critic isn't all fun and games, you know. What passes for art these days is so much garbage spread on canvas. I'm here to pick up a little something something for Genghis. We saw a dreadful exhibit at the city museum that sent him into a tizzy. (Bad Hair Day) 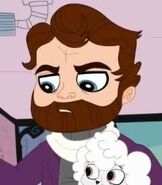