The day Mr. Von Fuzzlebutt was brought to Littlest Pet Shop, Russell had challenged Sunil and Vinnie to take his responsibility of entertaining the next guest.

Immediately after, Blythe came and introduced Mr. Otto Von Fuzzlebutt, who jumped out of his cage and jumped around excitedly laughing. Blythe went back to work on the shop's busy day, and Mr. Von Fuzzlebutt spent his time eating messily, playing with a ball and jumping around. Until he suddenly fell asleep, much to Sunil and Vinnie's confusion and concern.

Vinnie painted eyes on his eyelids and controlled his movements with Sunil's help (a parody of "Weekend at Bernie's") to prevent anyone from knowing about it, including an infatuated Penny Ling, in love with his "dreamily stare". They then tied an ankle each to him and went for an exercise run. Minka asked him to keep still so she could paint a portrait of him.

Blythe later took everyone to the park, where Sunil and Vinnie kept the act while they played. By the time they got back to the shop, the two were exhausted. They put the raccoon on a wheeled toy duck so they could rest, and during a moment of the distraction, the toy wheeled away and Mr. Von Fuzzlebutt ended up in a costumer's backpack. Vinnie and Sunil followed him to a bus and retrieved their guest.

The two tried to stash him in the tubes, only to be foiled by still-love-struck Penny Ling, Zoe, and Minka.

When his owner was about to return, the two started to panic, and Vinnie tried to wake up Mr. Von Fuzzlebutt with water at his face, only to be blocked by Sunil. Regardless, the raccoon woke up and explained his mini-hibernation, which he calls little power naps, essential to raccoons this time of year.

Mr. Von Fuzzlebutt reported to Russell that he had a great time at the shop, though he was not really sure what he did. Blythe commented that the sleepy raccoon looked really relaxed, but was shocked with his painted eyelids. 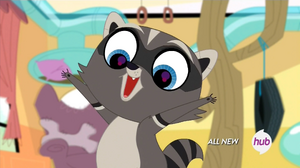