Anna Twombly, often addressed simply as Mrs. Twombly or Mrs. T, is the owner of Littlest Pet Shop. She hired Blythe as a part-time employee after her fashion expertise saved the shop.

Mrs. Twombly is an eccentric and kind woman. She cares a great deal for the pet shop and the pets and her heart is in the right place. She tends to be too confiding (as shown in Pawlm Reading) and her taste in fashion is extravagant, but the most of people who know her respect her for the cheerful mood, kindness, and devotion to her number one calling: Littlest Pet Shop.

Despite her otherwise perky nature, she can become rather frustrated on occasion. She also has a tendency to go off the deep end when she is cleaning the shop.

Mrs. Twombly has a well-known obsession with collecting door knobs, which is also her hobby.

Though she is elderly, Mrs. Twombly has surprisingly youthful features. She has grey hair with notable white streaks, light green eyes, prominent cheekbones, and a beauty mark above her lips. In her youth, she had dark red hair.

She wears a dark red dress with yellow sunflower-like designs, a black necklace and black bracelet on her right wrist, as well as a black belt. She usually wears reading glasses with a chain and black high heel shoes.

Mrs. Twombly: Don't these youngsters realize it takes twice as long to decide for their silly abbreviations as it does to state them normally in the first place? (Eight Arms to Hold You) 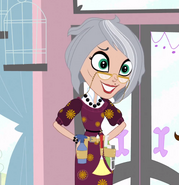 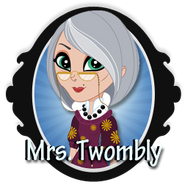 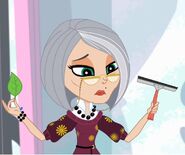 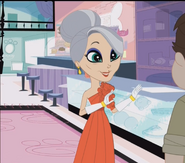 Retrieved from "https://lps2012.fandom.com/wiki/Mrs._Twombly?oldid=68011"
Community content is available under CC-BY-SA unless otherwise noted.