The short begins with the pets sleeping in Littlest Pet Shop snoring loudly with Sunil laughing in his sleep. Russell cannot sleep because of the noise, so he goes out of the day camp for some peace and quiet. Then he sees customers come in with a dog. He gets scared when the dog sees so he curls up in a ball. The dog picks him up and takes him to his owner. The owner and Mrs. Twombly think he is a spiky ball so she puts him in the bag. The customers take him out of the pet shop and he gets out of the bag. Then the street cleaner appears and Russell gets scared, so he curls up again.

He gets swept up and blown out of the cleaner and bounces off the buildings into the sewer. He carried by drains through the tubes into the ocean. A fish swallows Russell, but he gets out. He is grabbed by a fishing hook by a fisherman. He thinks Russell's a sea urchin and throws him in a tray full of urchins. The fisherman drives his boat across the sea around the world to a dock. He gives the urchins to sea animal delivery man. The delivery man puts them in his and drives off with Russell inside surrounded by sea creatures. The truck passes an airport where it hits speed bumps and Russell falls out onto a bag then into a plane.

The plane flies all the way to Downtown City Airport. Russell still on the bag in the baggage claim fall off onto a man's bag where hides in. He takes a taxi ride to where sees Blythe and discovers he is back at Littlest Pet Shop when the man turns out to be Roger Baxter. He gets so excited that he rolls back to day camp area. He accidentally bumps into Sunil, which makes him scream which wakes up the other pets. The pets get mad and Sunil shouts Russell for making noise. Russell, exhausted, just faints. 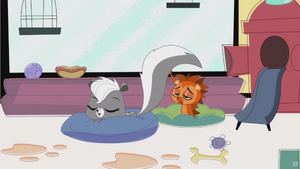 Click here to go on Naptime's a Ball image gallery