Ollie Arms is the star of a new octopus display at an aquarium in Downtown City. He ended up at Littlest Pet Shop after getting lost from the delivery truck.

At a Wednesday night, Ollie was being transported by a delivery truck to a local aquarium. Roger's abstracted driving startled the truck driver, making Ollie fall off and get lost. He wandered through the city, until a downpour washed him into a storm drain beneath Littlest Pet Shop. While being chased by sewer alligators, he escaped through a pipe that led him to a tub inside the shop. He ate some fish food he found, leaving puddles at the floor in the process.

The following morning, Blythe slipped at one of the puddles and Russell found an empty fish food container, wondering about the cause. At Friday, Blythe found another empty fish food can and some chewed on fish toys, to which Mrs. Twombly jokingly suggested that could only be logically explained as caused by a ghost. Later, Mrs. Twombly asked Blythe to clean up strange seaweed at the fish food section.

During the night, Russell heard a creepy squishing sound coming from the same place, where Blythe found more puddles. She then followed the puddles across the room to the tub, which was wet.

Vinnie was startled after stepping on a squeaky fish toy, which made him knock down the pile of fish food cans. Both him and Sunil were then grabbed by tentacles, making them scream and draw the attention of Russell, who believed the dark figure to be a "sewer-dwelling, hedgehog-eating reptilian ghost". A glow-stick collar revealed it was Ollie atop the fish food cans. He introduced himself and told everyone his story.

After the lights returned, Ollie took part at their sleepover, having tons of fun with a round of My First Formal Dance and showing to be excellent at making balloon animals. He confessed he only came out at night because he was scared of being seen.

Blythe promised to have Mrs. Twombly call the aquarium in the morning to come pick him up. 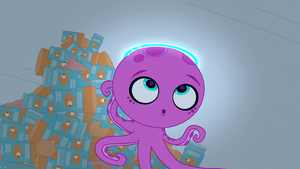