On the Same Page

On the Same Page is the twentieth episode of the fourth season of Littlest Pet Shop and the ninety-eighth episode overall.

Blythe becomes fearful that she may lose the ability to communicate with the pets. The pets have a petty argument that prevents them from communicating altogether.

The episode begins at Blythe's apartment, where Youngmee tells her new pet Nutmeg Dash about a new jacket that was featured on a pet fashion catalog. Nutmeg asks Youngmee to ask Blythe about it since she is not an expert on pet fashion. Blythe then tells her the jacket may look good on Nutmeg. Youngmee then whispers to Nutmeg so Blythe cannot understand what she is saying. When she question Nutmeg's thought, Blythe ends up being confused. She then looks over Betty's diary once more, but notices that the writing stopped after this entry that states about Betty losing her ability to communicate to pets.

At the day camp, Russell and Vinnie are playing Ringer, where the objective is to land a single ring into the base. Vinnie tries to gain focus, but due to Russell's scream, he loses control and ends up having his ring land into Penny Ling's doll pile. It is then Russell's turn, but he ends up miscalculating his throwing distance. Russell tries to find his ring, only to end up finding a dress, which makes him confused. Vinnie then reasons if they are entering the girls' territory. Sunil arrives and tells Russell and Vinnie he is not the only one who turned pretty. Blythe starts to worry about Betty's diary and her thought of losing her ability to talk to pets. Youngmee suggests using sign language besides talking to them, but Blythe states if she did this, she cannot reason with them.

Zoe shares an opinion about her new dress to Penny Ling, Pepper, and Minka. Penny tells her that it looks "pretty" because her dress matches her ears. Russell, Sunil, and Vinnie argue with the girls about dividing the entire day camp into two sides. The boys decide to create sanctuary upstairs at the loft, away from the girls. Russell suggests to Sunil and Vinnie about setting up their own park that may include mascots of themselves. The boys brag to the girls about their sanctuary that they have at the loft. Blythe tries to compromise the pets, but ends up with them turning their backs on themselves.

Back at the loft, Russell, Sunil, and Vinnie continue to have fun. Just then, Pepper arrives, asking Russell if this is what the boys actually do. The boys ends up answering, despite being confused. Pepper then grabs one of the pet food bags since the girls are hungry.

Meanwhile, Blythe tries to learn some sign language along with Youngmee, but runs into a few of these flaws, like trying to translate every hand motion.

Blythe tries to convince the boys on why them and the girls get social to each other by performing a hula dance. She then asks the boys if her dance represents love or an old "rolling wave". Russell then asks Blythe if he can get rid of this pink scarf. Sunil states that the scarf was for Minka's latest painting before he starts sniffing and cuddling it. The boys then join in on the cuddling.

During To Tell You The Truth, the pets struggle with how it feels to be separated while Blythe ponders about Betty's diary.

Roger comes into Blythe's room and explains to her to double check the diary if there are misinterpretations. Blythe agrees on his advice and both of them hug. As a result, Blythe finds a missing page from the diary, which was clear that Betty's loss of ability to communicate with pets could be vanished from a terrible taste of a certain medicine, much to Youngmee's surprise.

At the day camp, Russell, Sunil, and Vinnie told the girls to come back with them and Penny, Zoe, Pepper, and Minka embraced them. Blythe then comes to the day camp and told the pets to at least have the girls and boys stuff turned into their stuff (as what Zoe puts it) and Blythe and the pets all hug. In the epilogue, while the pets sleep, Russell felt uncomfortable, but then pulled out a pink scarf and, as a result, he felt comfortable and continues to sleep.

Main article: On the Same Page/Transcript 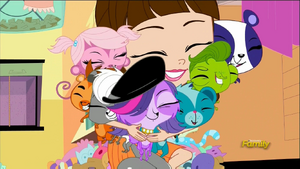 Click here to go on On the Same Page image gallery