Oscar Long is a recurring character in the series. He is not named in the series, but his name is used in merchandise.[1]

He is possibly named after the Oscar Mayer meat company.

Even before there was a toy of Oscar, he appeared on the "The Bobble is Back!" advertisement along with other characters, to advertise new toys with bobble heads.

In February 2014, a toy of him was shown at Toy Fair 2014 as part of the Franchise Re-Invention. He comes with a hot dog Deco-Bit.

Escaping from the Largest Ever Pet Shop 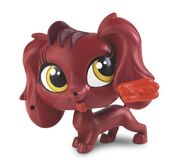