Penny For Your Laughs

"Hey, Penny Ling. You have a soft heart. And a head to match!"
—Pepper Clark

Penny For Your Laughs is the fifth episode of the first season of Littlest Pet Shop.

After realizing her lack of humor lately, Pepper decides to perform insult comedy. At first, it goes great, but she ends up hurting one of the most sensitive of all the pets. Meanwhile, Blythe befriends the Biskit Twins after she stands up to a bully harassing them.

Blythe is on her way inside Littlest Pet Shop when she meets the pets and reveals a package for Pepper. An eager Pepper quickly pulls out her new pudding-filled shoes. However, when she tries them on and begins to dance around in them, she sees everyone else would rather play with the box and the ripped-up pieces of newspaper inside. After asking about this and being told that her pudding gags are not very funny anymore, she begins to mope. Blythe suggests she should try a new comedy routine from an alternate source of comedy, then takes off for school after she cleans up the pudding.

After considering her words, Pepper tried to find a comedic inspiration when she notices a slobbery dog coming inside. She comments on it, then mentions the man who brought in the dog, and also Mrs. Twombly's off-key whistling. This is enough to make everyone laugh, except Penny, who finds the comments to be kind of rude. She asks Russell for his opinion, but he claims Pepper would not purposely try to hurt anyone's feelings and it is all in good fun.

At school, it is time for gym class and everyone is playing basketball. That is, except for the Biskit Twins, who would rather just stand around and are terrified of the ball. Vi Tannabruzzo starts to harass and pick on the Biskits for their clumsy playing until an agitated Blythe decides she cannot take watching this anymore. She approaches Vi and tells her off for acting so mean, accidentally insulting her height, which seems to make her leave. The twins, very happy and affectionate, thank Blythe for helping them. She does not seem to mind so much, but when they go on to claim her as their new best friend, she begins to have her concerns.

Meanwhile, at Littlest Pet Shop, Pepper is busy making jokes at everyone's expenses and they all seem to find it amusing still. Penny asks Minka about this, but Minka insists she is just taking it all too seriously, which makes Penny a little upset. She decides to just separate from the others for a while.

At school, Blythe joins Youngmee and Sue, who are discussing Youngmee's complicated lunch. They question her BFF situation with the Biskit Twins, but Blythe just thinks they overreacted to her defending them earlier and is sure they are over it by now. However, that seems to be far from the truth when she is handed a gold laminated note from the twins to attend lunch with them. This frustrates her friends after she decides to go and visit them and becomes very impressed by the large, four-course meal.

Back at Littlest Pet Shop, everyone continues to laugh away at Pepper's jokes, but they slowly become aware of how rude they sound, starting with Russell getting angry and ending with Sunil slumping onto a box sadly. However, Pepper does not want to stop and decides to target the sensitive Penny, thinking she would find it funny since she has not been laughing nearly as much as them. Zoe tries to warn her against this, but she does not listen. Penny hesitates, realizing Pepper may be targeting her now, with Russell even warning Pepper to be gentle with Penny. She assures Russell not to worry since she is a professional and knows exactly what she is doing. Pepper goes on with her joke and laughs, but when she sees everyone else glaring at her, she turns to see just how upset Penny is.

Russell flat-out tells her it is offensive. However, she decides to tell another joke instead and is told she went too far, which she does not understand until she sees Penny crying. As she stands back, everyone tries to comfort Penny, but it is not any use and she runs off for some alone time.

Back at school, as Blythe is preparing to leave, she sees Sue and Youngmee nearby. She does not see why they are upset about lunch with the twins and she claims she only did it to be polite. She makes an attempt to clear things up when a present is suddenly dropped into her hand. She presses the button on the touch screen to see the twins have left her a message. Youngmee and Sue storm off as Brittany and Whittany grab Blythe and take her shopping while they sing about their new friendship. At first, she is uncomfortable, but ends up going along with them, only realizing something is wrong when she laughs evilly.

At the pet shop, everyone keeps up with their attempts to comfort Penny, but to no avail. They look over at Pepper and she criticizes herself for being so rude like that when it was not her intention. After Minka points out that Pepper did not do it on purpose, it is enough to give her a great idea.

At the mall, Blythe and the Biskit Twins are using makeup when the twins reveal they have come up with some special poses for Blythe to practice. They then see a red-haired girl nearby and begin to pick on her, to which Blythe also contributes – until realizing it is Sue.

Back at Littlest Pet Shop, Pepper tries to use comedy to make Penny laugh. However, it does not work and she starts to imagine things in song.

At the mall, the twins begin to insult Sue, but this makes Blythe realize she did mess up in befriending them and she resigns as their friend from this point on, stating they would not have true friends and she only liked the stuff compared to the twins themselves. Being friends with two horrible girls who make fun of others is not worth it. They then leave Blythe once they get all of their items back and Sue approaches while Blythe apologizes for what happened.

After leaving, Blythe goes to Littlest Pet Shop and finds everyone in a gloomy mood. Pepper admits what happened and now does not know how to fix it, and Blythe admits that a similar thing happened to her today and Pepper just has to apologize. Pepper does just this and asks Penny to be her friend again. At first, Penny stays quiet, but then quickly grabs Pepper in a hug before handing her a gift: A pistachio pudding pie. She has Pepper smell it, then shoves it into her face. At first, Pepper is shocked, but then laughs and everyone else follows.

Main article: Penny For Your Laughs/Transcript

Blythe: Maybe you need a new shtick.
Pepper: I already have plenty of sticks. Unfortunately, they're filled with pudding.

"I mean, asking me to try a new shtick is like asking that bulldog to keep the slobber in his mouth."
—Pepper
"Maybe because you breathe as loud as Niagara Falls!"
—Pepper
"You know, Mrs. Twombly's whistling is so bad, the birds have to cover their ears!"
—Pepper
"Hey Minka! You got that faraway look! The farther away you get, the better you look!"
—Pepper 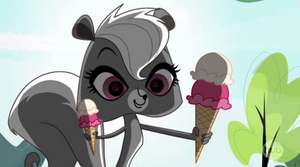 Click here to go on Penny For Your Laughs image gallery