Penny Ling is generally kind-hearted, sweet, and graceful. She tries to be helpful, but her help sometimes causes unwanted results. She is very sensitive and her feelings can be easily hurt as shown in Penny For Your Laughs, when Pepper teased her and made hurtful jokes about her (which resulted in Penny bursting into tears). However, in The Very Littlest Pet Shop, she simply became irritable when the same thing happened.

Her talent lies in gymnastics geared activities, but she is particularly fond of ribbon dancing. She is usually very graceful, but can be a bit clumsy, sometimes as a result of others messing her up.

While Penny is sensitive and harmless most of the time, she is shown to have a temper when pushed too far. In the event that she is angered, she reveals an unstoppable rage. In Mean Isn't Your Color, Penny held a grudge over a clothing design that she thought Blythe intended for her to wear and scared the other pets with her attitude. She also appears to possess a great deal of physical strength, which is demonstrated on multiple occasions. In Mean Isn't Your Color, she angrily tore a chair apart and in Topped With Buttercream, she nearly crushed Russell and Sunil when she hugged them. She also hoisted the rest of the pets in the dumbwaiter in The Treasure of Henrietta Twombly (although she was not able to for very long).

Surprisingly, Penny has shown a narcissistic streak and will make comments regarding her cuteness. She also fantasizes about everyone adoring her in Mean Isn't Your Color. She seems to also enjoy getting compliments on her appearance, shown in Secret Cupet. These traits can make her somewhat of an anti-hero. However, she gradually learned to lose this streak. In later episodes, Penny grows a bit egotistical and mean-spirited; it actually gets taken to a point where she straight up lies to her friends to be the center of attention. However, she still has her softer moments from time to time and eventually learned her lesson. 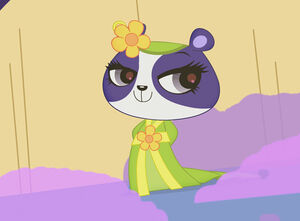 Retrieved from "https://lps2012.fandom.com/wiki/Penny_Ling?oldid=67002"
Community content is available under CC-BY-SA unless otherwise noted.