Pepper Mildred Clark is a skunk with a talent for comedy and one of the main characters in Littlest Pet Shop. She is Zoe's best friend. Pepper is often trying to think up new pranks, tricks, and jokes to tell and show to others, but she often takes things too far without realizing it until it is too late.

Pepper is a fun, comedic, and zany skunk who loves to crack jokes and play generally harmless pranks on others. Sometimes her pranks or jokes can get mean or rude, but she generally does not seem to realize this until the person she has teased or pranked begins to cry or tells her off for it. Pepper will also try to use her humor or tricks to try to perk others up when they are upset. Because of her tendency to accidentally upset others, she seems to have the most arguments with the other pets.

Being a skunk, Pepper hates it when others reference a skunk's natural musk; she is not normally smelly and it only happens when nervous, scared, or angry when not getting attention from her pet friends. When excited or happy, she will release a pleasant smelling scent instead. It has also been revealed that she can willingly spray scents if she needs to use it for some reason, much like a skunk's natural defense mechanism.

She takes comedy very seriously as when advised to laugh at whatever Captain Cuddles said, she insisted it is against her principles to laugh at something that is unfunny.

Pepper is different from the other girls because she is a tomboy, which means she is not that girly and is only interested in being herself.

Pepper was designed by Hasbro designer Kirsten Ulve in 2011.[1] The bonus "A Look Behind The Pet Shop Doors" featurette from the DVD "Little Pets, Big Adventures" revealed that, prior to January 2012, she was named "Jasmine."[2]

Pepper is curvy and ash gray with slightly darker coloring on the inside of her ears. Her muzzle, chest, stomach, lower back, and tail streak are pure white. Her eyes are a pale shade of pink with a light violet hue and her hair is a tuft of snow white bangs. 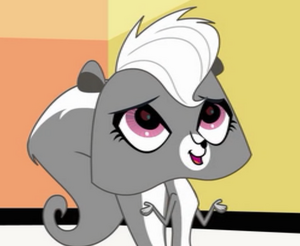