Petnapped! is the thirteenth episode of the fourth season of Littlest Pet Shop and the ninety-first episode overall.

Blythe and Youngmee try to save a Cocker Spaniel from her impostor owner while the pets try to reenact an episode of Russell's favorite TV show.

The pets are watching a local breaking news regarding the robbery at Stacie Mansion that was located at the Ritzy Upper Height neighborhood. Russell shows up and changed the channel, much to the pets' disappointment. Russell explains he recorded the season finale of his favorite show Duchess of Lancashire Lane and he does not want anyone to spoil it.

Pepper states they most unlikely watched the show, but Russell paused the recording and says that no one was allowed to talk since he does not want to miss anything. Sunil told him he "can't miss anything" and states that "nothing ever happens", but Russell doubts it. He says that despite the lack of action, he expects some "big reveals in the end". He then tells the pets to quiet down and proceeds to play the recording, unaware that he pressed the wrong button. Russell yells on about how that happened and Sunil told him he did not press play, but instead pressed "delete," making a devastated Russell screaming in horror.

Russell stated his situation to Blythe, who was looking at the photos of the pets on her tablet. Blythe says there is nothing he can do about it since it was deleted permanently, but she expects some reruns, making Russell worried. He also tells Blythe he was "supposed to host his D.O.L.L. meeting later today". Sunil suggests the pets can get the recap and perform it for him "just like a play". Russell agrees, but promises them to "really play the parts well" as Blythe gave the tablet to Sunil and Vinnie to look up the recap.

Zoe was glad that "another catastrophe" has been severed until a rare Royal Spanish Spaniel scampers into the pet shop. Blythe and Zoe notice it and Zoe asks the spaniel what is the matter. The spaniel starts to act it out since she has no bark and voice, which amuses Zoe, thinking it is like a game of charades. Youngmee walks in and Blythe told her about the problem. She takes a look to the spaniel and realizes she lost her voice because she has been barking too much. Youngmee soon knows that this spaniel was named Nutmeg Dash due to her sparkling eyes that has a "dash of spice" and her coat that looks like the color of nutmeg. She even notices she has created a connection.

Another person walks in and it is a crook with a terrible British accent named Bartholemew Backus III, who was supposed to be her owner. He then tells the girls there is a crown marking under her belly to make sure that was his dog. Blythe and Youngmee take a look and sure enough, there is "a crown shaped under her fur". He then attaches the leash to Nutmeg's collar and departs. Youngmee realizes that Nutmeg was trying to tell them there is something wrong with the picture. The girls and Zoe set off to investigate.

At Beaumont street, the girls and Zoe watch on from behind as Backus and a crew of crooks loaded up the truck and drive off, but not before Nutmeg took apart a peral necklace and used it to create a trail of them. The Girls and Zoe identifies it and they foolow it to see where it leads.

Back at Littlest Pet Shop, Sunil has set up roles for DOLL: Minka as Mugglesby Ropp, the grumpy cook, Penny as a maid named Sinisclaire Jintzy, Pepper as Peeves the butler (which she used the advantage as a joke), and Vinnie as the duke. When Vinnie questions on who the duchess will be, to which shows that Sunil will play the duchess. Russell wants to make sure it is ready, but takes it back since he does not want to hear any spoilers. When Sunil starts to discuss the script, Russell, with his ears plugged, yells, "Don't worry, I can't hear you!".

The girls and Zoe follow a trail of pearls that leads to a warehouse. Noticing it is filled of valuable stuff, Youngmee deduces that the crooks are the ones who robbed Stacie Mansion. Backus walks in with Roland Stuffinpoof and offers him a deal for the spaniel. After Nutmeg is taken out of the cage by Backus, Stuffinpoof realizes it is the "rarest of the breed" and demands a price. Youngmee notices Nutmeg is going to be sold.

The pets' version of DOLL started with Penny Ling dusting the living room. Russell stops for a second and says that these are the scenes from last season, so he wants them to "skip to the beginning of this episode". Sunil takes a look at the script and, in a state of shock, realizes that Russell was right, much to Vinnie's disbelief. With Russell awaiting for the reveals, Sunil tells the pets to improvise to make sure they do not want Russell to be disappointed. Vinnie starts by greeting Penny, which creates an awkward chat. He then shows Penny a plunger to make sure she is an "excellent maid". Penny then told him that she was hiding her identity as a plumber for 25 years. Vinnie tells Sunil about what happened and Sunil walks in and states she is not a duchess, but instead her sister. Vinnie suddenly realizes he is caught with amnesia and Minka does not know how to cook.

The girls and Zoe walks in disguised as Norma Jean Standalone and Olivia in order to rescue Nutmeg. The do so by outbidding Stuffinpoof, who then walk out in anger. Backus demands the money, but Youngmee forgot her checkbook, which blows their cover. They try to escape, but Backus catches Nutmeg in the process. The crooks get to work on moving away all the valuable stuff, while Blythe call the police to arrest them.

The pets' version of DOLL is about to close with Sunil stating:

"That is why, even as the light fades away for the last time, on this English Countryside, I will forever think of myself as... the Duchess of Lancashire Lane." - Sunil Nevla

Sunil proceeds to drink the last of the tea and fake his death, with Penny, Minka, and Vinnie bawling in tears. Russell knew it was the "best episode ever" and says that the reveals are so off the wall, they never seen it coming. He then gets ready to discuss the recap at the DOLL meeting, with Sunil saying that if he talked about what they did, Russell will make a fool of himself, and they decided to apologize.

As Backus and the crooks load up the truck, The Girls and Zoe goes incognito while giving them the set back. This leads Youngmee rescuing Nutmeg as The Girls escape just in time for the police to arrest the crooks for robbery. Youngmee realizes that Nutmeg not only got her bark back, but her voice as well.

Russell is about to discuss the recap to the DOLL club until Sunil and Vinnie arrives. Vinnie states that everything that Russell sees was made up by the pets and Sunil apologizes because during their set up, the pets never realized he accidentally got the recap from last year. Sunil then gives him the real recap – that is until Russell points out that it "was so boring", and "nothing happens". Russell accepts Sunil's apology and demanded them and the pets an encore to not only him, but also the DOLL Club.

In the epilogue, Blythe tells the pets that the police returned all the valuable stuff to the mansion and revealed that it belongs to the recently-deceased billionaire Willian Stacie. Blythe told them that all the valuable are being donated to charity, including Nutmeg Dash, much to Youngmee's disappointment. At that time, Nutmeg scampers into the show and the two share a hug. Jenson Benson, attorney of the William Stacie Estate, noted the police about the girls who saved the day, with one of them who has a connection. According to Stacie's will, it is stated that Nutmeg must decide on who will be her new owner. Nutmeg, obviously, told Youngmee to be her new owner.

Russell tells the pets they should have come up with a better ending. Sunil agrees while Vinnie discusses the ending with his notes, much to Russell and Sunil's amusement. 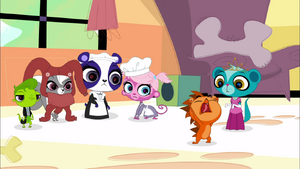