"He's a street mime, Zoe. Mimes act out situations and feelings without speaking. Paris is famous for them."
—Blythe Baxter, To Paris With Zoe

Philippe is a mime dog from Paris. He is very devoted to mimicking, and kept performing his routines despite Zoe's love acclamations. The toyline gives his name as Philippe Boudreaux.

While walking by Paris, Zoe was distracted by Philippe's act. He then picked an imaginary flower and gave it to her, which made her flattered, but also distracted her from preparing for the international canine competition.

The day after, a couple hours before the competition, Zoe went to see him again, and he once more performed the flower routine. She tried to get him to say something sweet to her, but he kept performing mimic acts, which she interpreted as love feelings for her.

She brought him to the dog show grounds and introduced him to Madame Pom, who failed to bring Zoe's focus back to the competition. Philippe performed the flower routine to Madame Pom, making Zoe jealous. Pom privately told Zoe she should be with someone of more depth, and suggested that Zoe was just seeing what she wanted to out of his gestures, to which Zoe replied as Pom being jealous and claimed to have lost interest on the dog show in favor of Philippe, whom she was going to be forever together, and went away from the dog show grounds.

Even after skipping to-and-fro together, Zoe failed to have Philippe to speak to her. Sick of his flower routine, she realized she should not have told Madame Pom off and got late for the dog show. Before going away, she said she would always think of him fondly, and he just kept performing his acts the whole time.

In mid February 2014, a Philippe toy was announced, accompanying a Zoe toy. Two couples of toys came bundled in the "Love in Paris" pack. 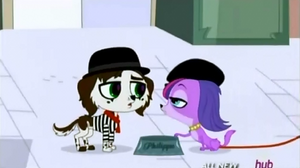