"You think that's bad, my owner's been dressing me up in pink and calling me "Princess" as long as I can remember."
—Princess Stori, Terriers and Tiaras

Princess Stori was one of many dogs competing in Terriers and Tiaras. He had an unbroken winning streak, having won every major pageant in the country. His fame attracted the admiration of Zoe, who stated he was the most famous dog on the pageant circuit.

He and the other pageant dogs revealed to Zoe that competitions like that were no fun, and he later joined Zoe in deserting Blythe and Judi Jo.

He gave up on competing, which Blythe communicated to Judi Jo by suggesting to her that his barking meant he did not want to compete in pageants anymore. Judi Jo was so disgusted by Stori's insubordination that she passed him on to her assistant Philippa to their great joy. 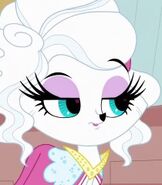 The irony is that this dog is actually male 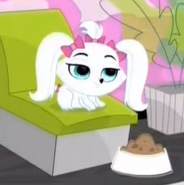