"It would appear that the very thought of his televised debut makes Basil break out in hives."
—Sunil Nevla

Proud as a... Peacock? is the twenty-second episode of the third season of Littlest Pet Shop and the seventy-fourth episode overall.

The pets try to help a bashful peacock prepare for his big debut at the botanical gardens. Meanwhile, Youngmee tries to convince Blythe to use her ability to communicate with animals for the benefit of humanity.

Main article: Proud as a... Peacock?/Transcript

Pepper: Hey Blythe, you're really studying hard at that algebra. I got to hand it to you!
Blythe: I don't get it.
Pepper: Aww! This was supposed to be a rubber hand!

"He's a robo-peacock! Run for your lives!"
—Vinnie
"Where does this yarn keep coming from?!"
—Zoe 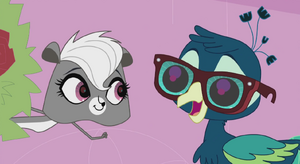 Click here to go on Proud as a... Peacock? image gallery