Race Team: Buttercream is the nineteenth episode of the fourth season of Littlest Pet Shop and the ninety-seventh episode overall.

When Buttercream attends an underground bunny race with Sunil and Vinnie, the starting bell has a hypnotic affect on her, turning her into a competitive brute named Flash McCarrot. Meanwhile, Roger coerces Blythe to stop using her cell phone so much. Eventually, Sunil and Vinnie take the phone and it is won by an arrogant bunny racer at the races. When Sunil and Vinnie discover Buttercream's condition, they must rely on their friend to win back Blythe's phone when she discovers that Josh is trying to contact her.

Blythe is being too dependent on her cell phone. Her father essentially dares her not to use it for one week. For the convenience of the plot, they do not bring up laptops, tablets, or other means of potential communication. Meanwhile, Sunil and Vinnie are going to the underground bunny races and Buttercream is going to tag along. As they get to the races, a bell rings to mark the start of the race and to turn Buttercream into Flash McCarrot and she is competitive with the other racers.

The top racer Fluffy Lightning challenges Buttercream (also known as Flash) to a race. Meanwhile, Blythe hands Russell her cell phone to help her not be so dependent on it. He then gives it to Sunil and Vinnie to record the upcoming race. Of course, the bell turns Buttercream to normal, Fluffy easily wins, and she gets the trophy – Blythe's cell phone, which Sunil and Vinnie left lying around. Of course, Blythe is then told by Youngmee that Josh asked about her about Blythe's phone number, which effectively nullifies the pledge.

Of course, Sunil and Vinnie now need Buttercream to turn back into Flash and win the phone back. They convince Fluffy to another race by saying Flash let her win. Of course, several plot contrivances later with the ball and Buttercream moving at the speed of the plot, she wins. As it turns out, Josh wanted Blythe's opinion on a Pet Wellness Center since he wanted to take his pet Fluffy there.

Fluffy: You're tellin' me that you let me win that last race because you felt sorry for me?! Look here, ya dirty rats! I oughta--
Sunil: Actually, I am a mongoose, and he is a gecko.
Vinnie: And we're both very clean. 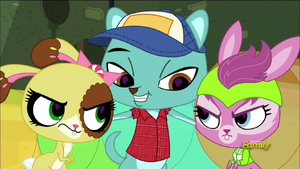