"Come on, Blythe. Have I ever steered you wrong?"
—Roger Baxter, Blythe's Big Adventure Part One

Roger Baxter is Blythe's father. He is an airline pilot, meaning he is often away from home for a while.

Roger is funny and fun-loving. Though a fine pilot, he is ironically a terrible driver. He is shown to be somewhat clumsy and accident prone. He is a bit behind the times, but often tries to be cool. He is very caring towards Blythe and tries to be understanding, even though he does often embarrass her.

In Blythe's Big Idea, he gives the idea of the airline he works with an idea for a "Pet Jet," based on his daughter's love of the pet shop.

In Grounded, he is a chauffeur and personal assistant for the Biskit Twins – until they insult his daughter. Once this happens, he refuses to serve them any longer. However, he does assist their father.

In The Sister Story, it is shown that he is very competitive with his older sister Mo, but loves her nonetheless.

In Littlest Pet Street - Part 2, it is revealed that he knew Blythe was able to speak to pets all along since she inherited it from her mother.

Roger wears a red shirt with darker red plaid patterns and white buttons, blue pants, a belt, and black shoes. He has a square face shape, brown hair, and bits of the roots around his ears starting to grow white. He has blue-green eyes.

Bribing an officer? For shame, Roger! 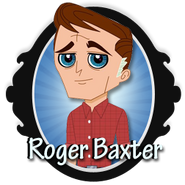 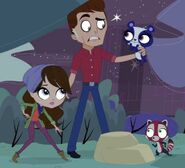