Russell Ferguson is a hedgehog with a talent for organization.

Russell is somewhat uptight, but always makes sure his plans go through and keeps things from getting too out of control. Because of his orderly skills, he frequently acts as the leader of the pets.

Out of all the pets, Russell is considered to be the most level-headed. He is intelligent, clever, and loves to organize things and make plans. Unfortunately, he sometimes goes overboard trying to make too many plans at once. He also tends to overly-complicate things when they should be really easy to do or manage.

It is not that he means to make things harder or seem twice as challenging since he simply wants to try to make everything as flawless as possible in order to succeed.

Sometimes, he can be a bit selfish, such as when he tried to make Minka sell her art and what-not, not realizing he was only making it business for her, thus no longer any fun. Fortunately, he realizes his behavior towards her was unacceptable and apologizes to her at length. He has a fairly cynical view of "love" as seen in Secret Cupet. However, after briefly falling in love with Penny Ling (due to a love song spell by Sugar Sprinkles), he seems to have a slightly more positive outlook on it.

Russell Ferguson was designed by Hasbro designer Kirsten Ulve in 2011.[1] One of her original illustrations shows he had a very different appearance, with different spikes and ears. He also had a brown face and belly and wore a pink tie.

The bonus "A Look Behind The Pet Shop Doors" featurette from the DVD "Little Pets, Big Adventures" revealed that, prior to January 2012, he was named Winston.[2] In 2011, the name Randall was used.[3] That same year, the name Sonic was used until Sega of America threatened legal action against Hasbro.

According to Julie McNally Cahill, he was named after Russell Johnson, who acted as the Professor on Gilligan's Island,[4] and his original last name was "Fergus, in honor of an awesome cat [she] used to have".[5]

Russell is a bright orange colored hedgehog with light coloring inside his ears and bright golden-green eyes. His muzzle is the same color as his fur, while the markings on his face and tummy are peachy-orange. His quills are a mixture of bright brown and dark brown. His black nose is small and pointy, and he also has a tiny fang that often sticks out. 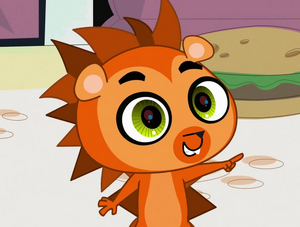