Russell Up Some Fun

"There's no Seriussell in the hizzouse, only Fun Russell. Woop woop!"
—Russell

Russell Up Some Fun is the seventh episode of the first season of Littlest Pet Shop.

Pressured by the pets to loosen up, Russell creates his alter-ego "Fun Russell." Meanwhile, Blythe helps Sue through an identity crisis after she starts to imitate Blythe's style and personality.

Russell is going over the huge pile of toys in front of him, categorizing which toys are loud, soft, or broken. As he goes to put a new broken toy into the garbage, he hears the others making a commotion and investigates the cause of it. When he criticizes Pepper's arrow-through-the-head gag, he complains she could harm someone, but this makes everyone angry that he is interrupting her show. She tries to reason with him, saying it is rubber and harmless. However, he decides to confiscate it until he can make it even more harmless and everyone walks away.

Later that day, Blythe takes Zoe and Minka for a walk when she bumps into Sue and they talk for a couple of minutes. Blythe invites Sue over to her place since it is nearby and she can get cleaned up there.

Meanwhile, at Littlest Pet Shop, Sunil and Vinnie mess with everything Russell has been cleaning up and tending to all day. He confronts them on it after he finds out and they mock him, much to his aggravation.

Sue returns into Blythe's room, having borrowed her clothing in the meantime. Blythe compliments her on it, though Sue is not very sure and she instead keeps changing subject to Blythe and comments on how cool she thinks she is. She then asks Blythe a whole lot of questions.

Russell goes over his checklist again. He then discreetly asks Penny if she thinks he is too serious. She tries to avoid saying it, but eventually admits it and even points out a time for example. This being what he did to ruin the fun to be held at Minka's surprise birthday party about a month ago. She then tries saying while they appreciate how serious he is, it would be nice if he could also relax and tone it down a bit.

At school, Blythe is with Youngmee and Jasper. Sue approaches, still wearing the outfit that Blythe lent her. She asks to borrow them longer and Blythe does not mind at all. However, she notices Sue keeps finishing her sentences.

At the pet shop, everyone is introduced to a new pet named Mary Frances, whom Russell incidentally mistakes for a girl. Everyone manages to smooth the situation over, but he asks Mary to come with him so they can fill out a questionnaire they do with new pets.

Back at school, it is time for lunch and at this point, Blythe is beginning to seriously worry. Sue has been acting strange the entire day and she cannot figure out why. Sue asks Blythe for tips on how to "perfect" and while she tries to claim she is not, Sue insists she is and doesn't listen. In hopes of reaching her friend, Blythe sings a song.

At the pet shop again, everyone tries to encourage Russell to be more fun by goofing around. Everyone dresses up to have fun. At first, he refuses until he thinks they are now mocking him. He decides he will have to prove to them he can be just as fun as anyone else can and so, takes on a new persona "Fun Russell." A bit later, Blythe finds him drinking at the snack counter in the pet shop and she asks him about his new personality before angrily yelling about this. Listening to Russell before he runs off, Blythe gets an idea to try to get Sue to act like herself.

The following day, at school, Blythe decides to try to trick Sue by dressing in a horrible, mix-match type of fashion. Everyone is shocked and unsure of how to speak when the Biskit Twins come by. Surprisingly, they compliment her on it instead of telling her off for how it is.

Back at the pet shop, Russell is causing chaos everywhere he goes, such as throwing toys and scaring Pepper with a loud noise maker while she juggles, making her drop everything. He then starts to sing about how much fun being fun is.

In hopes of showing Sue how "not perfect" she is, she shows up to class late and claims she was not mentally ready, thinking the teacher would angrily scold her for this. However, he instead agrees with her and tells everyone to take a mental break, much to her shock.

At the pet shop, the pets continue to have careless, chaotic fun. A food fight starts after a bowling ball runs into Pepper, making her throw her bowling pins she had been juggling at one of the food bins. However, Mary is not too happy about the turn of events since he simply wants some peace and quiet.

Back at school, Youngmee and Jasper notice how upset Blythe is. Unaware that Sue is spying on them, she explains to them how hard she has been trying to get Sue to stop imitating her. However, she keeps messing up and is bad at being bad. There is not anything she can do wrong. Heartbroken, Sue tearfully runs off as Jasper suggests there must be something she is bad at. It is then Blythe notices a sign for the track team on the nearby wall. She runs off, pretty sure she can get Sue to realize her error.

Penny informs Russell that Mary Frances is missing and they need his help. At first, he assumed they wanted him to be more fun, but upon hearing this, he claims it is not his problem. They try to convince him to look for Mary before his owner comes back, but he refuses. For now, they are on their own.

At the track area, Blythe sees Sue stretching. She approaches her and tries to say she is "really good" at track, but Sue informs her she does not need to do this since she overheard Blythe talking to Youngmee and Jasper earlier. She got so carried away with being Blythe, when all she had to really do was work on being herself. Blythe tells her she is fine the way she is and goes to leave, but the track teacher catches her. Blythe tries to refuse, but she does not let her.

Exhausted after so much fun, Russell settles down for a nap when the other pets confront him. They beg him to act normally again, but he claims they only want this so they can make fun of him again. Penny bursts into tears as he does this, so he eventually agrees and pulls out the notepad he had earlier to look at the fact he has on Mary Frances. He has Sunil and Vinnie check the football toys since Mary Frances loves football, then asks Zoe and Minka to look at the medicinal items since he may have tried to find something for his itchy skin. He then sends Pepper to check the broom closest and Penny to check the restroom. Before she leaves, Penny happily comments on Russell's old behavior.

Back at the track, Sue tells Blythe how to long jump. Blythe comments on how easy this is and she starts to run, unaware of her untied shoe lace. Sue then goes next and manages to set the record for the long jump. As Blythe happily comments on this, the other track members arrive and congratulate Sue on how well she did. They then carry her off to hang out and talk to her.

As he is looking around, Russell notices some tiny pieces of food on the ground and follows them, leading him right to Mary Frances, who had been sleeping under the table, now full of food. Later on, his owner comes to pick him up and they take their leave. Everyone starts to cheer, happy to have the original Russell around once again. It is then Pepper puts the fake arrow on her head. He recoils, but just for a second, seeing all of the other pets have also did it. They all start to run around, making him lecture them on poking an eye out. As they run away, Blythe comes inside and she comments on his lack of shirt, to which Russell says it was not his style. Russell then points out that his old self is fine the way he was. However, he does plan to be a little less serious; as a sign of this, he puts the arrow on the top of his head as well.

Main article: Russell Up Some Fun/Transcript

Blythe: Hey, Russell. Why'd you lose the shirt?
Russell: Eh, wasn't my style. Anyway, we all decided that the original Russell was perfectly fine the way he was.
Blythe: So does that mean Fun Russell is gone for good?
Russell: I'd say so. But, "Slightly Less Serious and More Easy Going" Russell might visit from time to time. 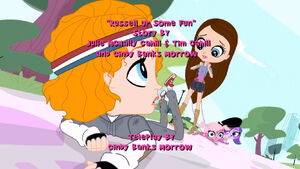 Click here to go on Russell Up Some Fun image gallery