Scout Kerry[1] is a siamese cat who first appeared in Books and Covers.

Scout was inspired and named after the Cahills' own Siamese cat.[2]

When Scout first arrived at Littlest Pet Shop, she hissed at the pets, then climbed a cat tree and started to shred its price tag. The pets were suspicious of Scout mostly because of her trenchcoat-wearing owner. When they saw Scout eyeing Mrs. Twombly, they thought she was a spy sent from Largest Ever Pet Shop to sabotage the store.

After being kept away from Mrs. Twombly all day, Scout asked the pets what they were doing. After hearing their suspicions, she revealed she had just wanted Mrs. Twombly's newspaper as she enjoys shredding things.

In May 2015, Scout Kerry was one of the Littlest Pet Shop Happy Meal toys at McDonald's, along Zoe Trent, Russell Ferguson, Buttercream Sunday, Carla Decourant and Regina Vogel.[4] 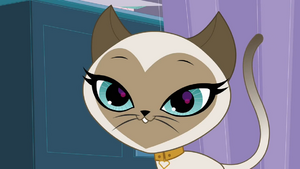