"Ooh! I've heard about this. They say there's a mysterious pet out there who goes around spreading love. Like some kind of pet cupid!"
—Penny Ling

Secret Cupet is the fourth episode of the third season of Littlest Pet Shop and the fifty-sixth episode overall.

Russell is determined to put a stop to a secret pet "cupid," but ends up under her spell instead. Meanwhile, Blythe tries to sort through her feelings for Josh Sharp, her green-eyed, brunette secret crush.

Blythe and Youngmee are carrying bake sale goods through the school grounds. Blythe looks up from the tray she is carrying, and notices Josh Sharp is in front of them. She surprises Youngmee by telling her to hide because of Josh. This makes Youngmee confused, because Blythe has a crush on Josh. Blythe replies back with the argument of whenever she's around Josh, something embarrassing happens, then he says hi, and she has no idea what to say, so she laughs a "stupid, goofy laugh". To prove her point, she demonstrates the laugh for Youngmee. The latter states that it "is embarrassing",  but then replies that it cannot be that bad.

They try to sneak by Josh from behind the bushes, but Blythe, not looking where she was going, slips on a mud puddle - even though Youngmme tried to warn her - and slides in front of Josh, while she accidentally tosses the cupcakes into the air. Josh comes over to say hi and Blythe laughs her "stupid, goofy laugh". Josh walks away as Youngmee walks up to Blythe stating, "It is that bad."

At the pet shop, Penny, Minka, Pepper, and Zoe are watching loving couples through the window with Russell right behind them. Penny then states:

Then, she proceeds to point out the various couples through the window.

Everyone was excited for Valentine's day except for Russell, Sunil, and Vinnie, who tease the girls by saying they like non-romantic movies. Penny tells Russell that someday, he will experience how love is, but Russell, Sunil, and Vinnie doubt it. When the pets enter the day camp area, Russell sees the new camper, a goat named Baa-Baa Lou, eating one of the drapes. Baa-Baa Lou explains to the pets that fell in love right before he came to the Pet Shop.

Baa-Baa Lou: I remember it as if it had happened 5 minutes ago.

Penny Ling: Because it was so romantic?

Baa-Baa Lou: That, and because it happened 5 minutes ago.

He starts to tell his story to the pets in flashback style. It shows him and his owner walking through the park on their way to LPS. He passes a pink pig, saying, "I didn't even notice her." Then, it zooms in on a bush, where a pair of eyes peek out. Baa-Baa Lou states he heard music playing, turns to face the female pig, and falls in love with her.

As a result, Lou sees the love that he was looking for. This prompts Russell to find the Secret Cupid, whom he says "is just some sort of love vigilante who must be stopped". He dons his Cyril McFlip disguise and the other pets sing a small portion of the Cyril McFlip song. However, Russell cuts them off, asking which of them is with him.

"If this secret cupid character sees us walking to the park, he's bound to try to make us fall in love." - Russell

During the phase, if the Secret Cupid character shows up, Sunil and Vinnie will jump in and capture it with their nets.

While Blythe realizes her written letter can lead to Josh to meet with her, the pets tell Blythe to take a walk around the park with them and Blythe agrees.

At the park, the plan goes well, with Russell and Penny in disguise, talking to each other as a fake love chat. Russell jumps behind the bush to capture the Secret Cupid, but to his surprise, it turns out to be Sugar Sprinkles.

Sugar Sprinkles says he got her, but she has also got him too. She proceeds to play her love song on him and pushes him out from the bush and she follows as well. Russell then targets Penny due to her being the first pet he sees as his loved one. Sunil and Vinnie jump in to capture the Sugar Sprinkles, but they end up capturing Russell instead.

"Why aren't you running after her?" - Sunil to Russell (as Sugar Sprinkles runs away)

At the pet shop, Blythe needs to bring Minka with her in order to get her written letter back. Minka found the letter and gave it to Blythe. Unfortunately, Minka inadvertently gives Blythe a green envelope, much to her disbelief. Blythe then noticed that her written letter (in a red envelope) was taken by the mailman.

Meanwhile, Russell tries to seduce Penny by giving her some flowers.

Penny thanks Russell for the flowers and tries to walk away, confused. Then Russell appears right in front of her and gives Penny another gift: a box full of bamboo candy (which were strawberry flavored). Penny tries to walk away again, but Russell, with a rose in his mouth, decided to "tango" Penny, and even talk to her using Spanish, which is the language of love. Russell tries to kiss her, but Penny backs away until she hits an armchair. She cautiously asks Russell if he could take a break from the romance for a while. Russell responds with the fact that "love takes no vacations" and kisses her arm. Penny Ling says it is too bad since she says she needs one right now. Then she runs off, accidentally knocking Russell to the ground. He then starts to chase after her.

Meanwhile, Blythe brings Zoe to get the letter from the mailman. Unfortunately, Zoe mentions that chasing a mailman is such a cliche. However, when she runs up to the mailman, he pulls out a squeaky toy to distract her.

Back at the day camp, Sunil and Vinnie decide to capture the secret cupid character (Sugar Sprinkles) once and for all. However, they get caught by Sugar Sprinkles' love spell and targeted Minka and Pepper (Vinnie to Minka and Sunil to Pepper), much to the girls' disgust. They decide to hide behind the toy box with Penny and discuss the situation, but Russell, Sunil, and Vinnie surprise them and Penny, Minka, and Pepper run away.

Penny, Pepper, and Minka thought that they lost those guys when they hide in the dumbwaiter, but ends up seeing Russell, Sunil and Vinnie on their disco styled clothes, making the girls flee.

They end up seeing Sugar Sprinkles inside the Sweet Delights truck and tell her that her love spell has created "three monsters" since the love spell was out of control. The sprinkled cat states they will get used to it, but the boys climb into the truck, pop open their collars, and move their heads back and forth. Seeing this, Sugar Sprinkles states it is wrong and mentions she has never tried to reverse her love spell. She yells at the boys to snap out of it, but they just advance forward while they snap their fingers. Then Sugar Sprinkles gets an idea to sing her love song backwards. The spells breaks, but Russell, Sunil, and Vinnie (who were holding Penny, Pepper, and Minka) drop the girls onto the floor in disgust.

Russell: "Huh? *notices that he is about to kiss Penny Ling* Yuck!"

Meanwhile, Blythe finally gets her hands on that letter when the pets run over the mailman. However, she accidentally meets Josh again, and this time, Blythe escapes while Sugar Sprinkles hides behind the tree and conjures up her spell on Josh.

Back at the Pet Shop, Blythe, Penny, Minka, and Pepper saw Baa-Baa Lou, who was with his girlfriend, while Russell surprisingly showed up, stating that these two "make a cute couple".

"Y'know, I have to admit, they make a cute couple." - Russell

They don't get it, but Russell said he is taking Penny's advice from the beginning of the episode, stating that someday, there may be a time and place for love. Sugar Sprinkles shows up on what Russell said it literally and pulled out her guitar.

"Well, I supposed there is a time and place for love." - Russell

Towards the end of the episode, Russell confiscates Sprinkles' guitar in frustration while Sprinkles pulls out a spare from behind her back. 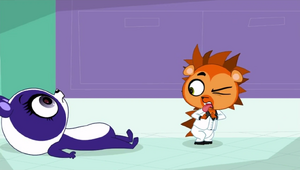