Seeing Red is the twenty-fourth episode of the fourth season of Littlest Pet Shop and the one hundred and second episode overall.

Blythe writes a short story based on her parents when they were teenagers. Penny Ling is curious about a red panda who attends the day camp.

Blythe is typing up a short story draft for a contest at her school. She is typing a love letter from her father to her mother from when they were her age for her short story competition. The pets become emotional after hearing the love letter. After reading a part from her short story, Penny Ling starts to cry because of how sweet it was. Penny proceeds to cry in the dumbwaiter while Blythe, Zoe, Pepper, and Minka try to cheer her up. 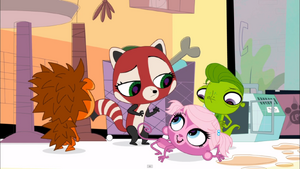