Senior Day is the fourth episode of the fourth season of Littlest Pet Shop and the eighty-second episode overall.

Russell begrudgingly agrees to let his father Jerry move in with him. Meanwhile, Blythe befriends an elderly woman who is eager to have Blythe meet her kindhearted granddaughters. 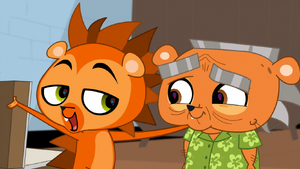