Shahrukh is a famous mongoose film star, who appeared in Lights, Camera, Mongoose!

Shahrukh is a light blue mongoose with green eyes.

Shahrukh met Blythe and the pets when they visited the set of his latest film. He stowed away on Blythe's scooter back to Littlest Pet Shop, telling the pets he was tired of being a celebrity, claiming the attention was too much for him.  As he went into the pet shop, his owner mistook Sunil for him, and took him back to the set.

Once inside the shop, Shahrukh was very demanding and bossy, having the pets do everything for him. Tired of his attitude, the pets made Shahrukh as uncomfortable as possible. Shahrukh decided he wanted to return to his former life and was switched back with Sunil through the other banded mongoose's magic. 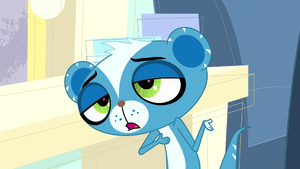