Shakespeare is a dog who only appeared in Game of Groans. He looks like and is named after the famous poet William Shakespeare.

Shakespeare is a thespian dog and is very dramatic and hammy. 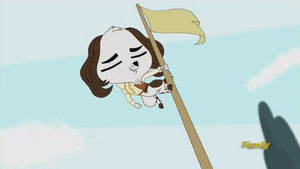 Retrieved from "https://lps2012.fandom.com/wiki/Shakespeare?oldid=66104"
Community content is available under CC-BY-SA unless otherwise noted.