Shanghai Hi-Jinks is the seventeenth episode of the second season of Littlest Pet Shop and the forty-third episode overall.

When Blythe and the pets travel to Shanghai to attend a ceremony honoring Mrs. Twombly as originator of Kung Fu Quilting, Penny Ling is reunited with family she never knew she had. Meanwhile, the pets prepare a Chinese dragon dance to ward off spirits.

Blythe is on duty placing dog tags on a stand-in tree when Mrs. Twombly surprises her and said that she was set to be honored as the originator of "Kung-Fu quilting" at Shanghai, the biggest city of China. However, she refuses to go after telling Blythe she does not have any family to go with as Mrs. Twombly shows Blythe a picture of her sister who was in a top secret mission for 2 years. Blythe tells Mrs. Twombly that she and the pets are family and decides to have themselves travel to Shanghai through Pet Jet, to which Mrs. Twombly agrees.

The pets are excited to go to China, but Penny Ling has something better if they head to China: Meeting her family.

At the Pet Jet, while Mrs. Twombly has difficulty making her speech, Blythe shows the pets her design of a dragon costume, much to Sunil and Vinnie's fear. She tells the pets that a dragon's dance is the only way to get rid of the spirits, which also makes Russell scared. As for Penny Ling, she wonders how her family looks like as her expectation involves on Penny heading towards her family, accompanying the sound of a squeaky toy. First, Ling Jun tells Penny they had a long time waiting and then tells her to show her nails, for which Penny describes them "pretty" before Ling and Jun show their bellies. Ling Pen compares their eyes with Penny Ling, much to her excitement. At the end of her expectation, Penny is excited to see her family and hugs them.

At Shanghai, Blythe brings Penny along to the Shanghai Wildlife Reserve through a "really fast shuttle tour" to see Penny's family.

Meanwhile, Russell gets teased by Zoe, Pepper, and Minka. Pepper brags about how to get rid of the spirits by dancing and Vinnie demonstrates in a song.

At the reserve, Penny Ling is excited to see her lost long cousin Ling Pen, who tells her about her accent. Penny is then introduced by her sisters Ling and Jun and asks if she can talk about her life or her family's life, but declines. The only thing her family likes are the movie musicals, to which Jun Ling states, "We like American movie musicals. You must like to sing out all the time in the rain." At this time, Penny Ling's family demonstrates on their tap shoes and on their raincoats with their umbrellas. Later on, Ling Pen invites Penny Ling to the family dinner tonight for her honor.

Back on the regular shuttle, Blythe tells Penny that the Chinese New Year celebration is tomorrow. However, with her family dinner being set for tomorrow, Penny cries, prompting Blythe to change her mind.

At the family dinner, Penny arrives on her Statue of Liberty costume since she was reminded by Ling Pen yesterday that he wanted to see her in her favorite American costume. Her family is in disbelief, but decides to move along. Unfortunately, her dinner does not go well with all the tofu, to which Ling Pen states that the smell of tofu makes the taste even better, much to Penny Ling's disappointment.

During the dragon dance, the dragon costume get stuck on a nail and the pets try to budge it. Penny is excited when she wants to be part of the dragon dance with her family, but Ling Pen tells Penny Ling there is no room to fit in. But Penny knew one thing where she fits in: The pets.

Penny arrives to help the pets release the dragon costume that was stuck from a nail and joins in to finish the dance, along with her family. 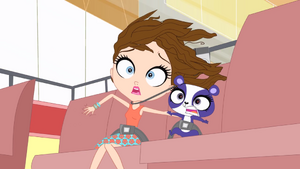