Shivers is a wild squirrel whom Blythe met in the dumpster outside Littlest Pet Shop in Blythe's Pet Project.

Blythe met Shivers while looking for Mrs. Twombly's glasses. Noticing that he was shivering from the cold, she named him Shivers. Shivers later entered the day camp, claiming to be Blythe's pet and generally annoying the pets by hogging all the food, water, and pillows. He suffers from compulsive hoarding.

Soon after Blythe debunked his claims of being her pet, the others discovered their possessions were missing. They accused Shivers (and were proven right) finding their possessions in the attic. At first, he tried to pass off his stealing as "gathering", but the others refused to accept that. Breaking down, he tearfully admitted he had a problem. Blythe tried to leave Shivers at the local park, but he kept returning. When questioned, he admitted he had a home at the park, but it was too cluttered to live in. Blythe and Pepper helped to clear out the tree and Shivers happily returned home. 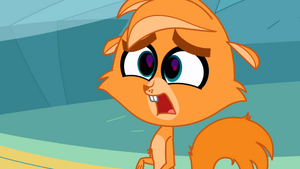