Sleeper is the first episode of the third season of Littlest Pet Shop and the fifty-third episode overall.

Sunil and Vinnie are challenged by Russell to entertain Mr. Von Fuzzlebutt, a jovial raccoon and new day camper, who falls into a deep sleep confusing the pets. Meanwhile, Fisher Biskit tries to figure out what the secret is to Littlest Pet Shop's recent success.

"That Mr. Von Fuzzlebutt is the most charming pet I ever met. Oh, and those eyes... Oh!"
—Penny Ling

Later on, Minka decides to make a painting of Mr. Von Fuzzlebutt. Both she and Russell are surprised Sunil and Vinnie got him to sit so still, considering what an energetic raccoon he is. At Largest Ever Pet Shop, Fisher tells the Biskit Twins to sneak in Littlest Pet Shop in disguise as customers to see what makes Littlest Pet Shop a success. At Downtown City Park, the pets started to play around. During Hangin' by a Thread, Sunil and Vinnie take part in a lot of activities with sleeping Mr. Von Fizzlebutt, such as catching a frisbee, covering Von Fuzzlebutt with an umbrella during the rain because they cannot let their cover be blown and even go along with a date between Von Fuzzlebutt and Penny.

At Littlest Pet Shop, the Biskit Twins, now in disguise, sneak in to find out how the store became a success. Meanwhile, Sunil and Vinnie untie their rope due to their legs being tired. However, as soon as they let go of Von Fuzzlebutt, he gets into trouble and they have to chase him. They end up capturing Mr. Von Fuzzlebutt on the bus.

To that point, the Biskits built a water park since the only info the Biskit Twins got was about an "excellent water" at Littlest Pet Shop. A customer shows up and Fisher tells him that his water park is a "safe way to travel". However, it starts to collapse after Fisher overloads the water supply that was heavy enough to break the entire construction and flood all over the place. Fisher promised himself he will rebuild eventually. Sunil and Vinnie, who were relaxing, start to panic when Blythe tells the pets that Mr. Von Fuzzlebutt's owner will arrive soon. Vinnie tries to throw water at Von Fuzzlebutt's face, but splashes Sunil instead as the latter throws himself in the way in order to prevent those painted eyes to gets washed off. At the same moment, Mr. Von Fuzzlebutt wakes up and states to the boys that he was in his "mini-hibernation", much to the boys' disbelief. When Russell asks him if he had a good time at Littlest Pet Shop, Mr. Von Fuzzlebutt states he did not, but he had a great time (even though he is not really sure what he did).

At the end, Russell is going to give an apology to Sunil and Vinnie for not giving them the respect they deserved, but the boys stated he does not have to. They were just glad the day was finally over.

Vinnie: Hey! Sunil and I take offense in that.
Sunil: Absolutely! It was a crass verbal affront to our mutual integrity!
Vinnie: Uh... what he said.

"Like, check the parade of losers."
—Whittany
"I had a great time! Though I'm not really sure what I did..."
—Mr. Von Fuzzlebutt 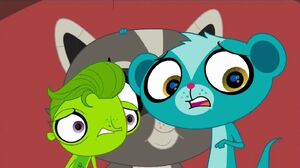