So You Skink You Can Dance

So You Skink You Can Dance is the twelfth episode of the first season of Littlest Pet Shop. It is the thirteenth episode in the series overall.

Vinnie joins Blythe and her father on a trip to Hollywood to see his favorite dance show Shake-A-Leg. While they are gone, the other pets come up with a solution to keep their television remote from getting lost.

An angry, giant Vinnie causes mass destruction as everyone runs and hides in a panic to avoid him. As Blythe and Sunil talk to each other, it is revealed that Vinnie actually just destroyed the room the pets play in searching for the remote to watch his favorite show Shake-A-Leg. And apparently this happens on a daily basis. A frustrated Russell voices his annoyance and suggests they find a permanent place to keep their remote. When Blythe suggests they just record Vinnie's show so he will not miss it, Pepper reveals that "someone" filled their recording space with something he likes and he refuses to rid of them.

Blythe talks to Vinnie during a commercial break and she mentions that sometimes her father takes her on his trips and if she brings him along, they may get to see a real taping of the show in person.

Later, on the plane, Blythe embarrassingly listens to her dad as he makes horrendous puns. She asks Vinnie what else he may like to do while in Hollywood, but he is focused on seeing his show.

Back at the Pet Shop, everyone is trying to find the perfect spot to keep their remote after Minka brings it up, along with Vinnie's destruction of the playroom. She brings them into the main room and shows them where she thinks the remote should go. She tries to show them how easy it is, but winds up falling into a big bowl of dog bones and agrees that maybe they need a better spot.

On the Shake-A-Leg stage a tour is being given. Blythe and Vinnie stay behind to watch as the dancers start warming up and observe the stage. She comments on how graceful they look before asking how they could maintain their composure while the camera is on. Blythe also reveals she would have liked to be on television, but she is camera shy. She starts to think of a couple memories when she was little and how badly she reacted whenever she realized she had been on camera and claims she wants to get over her problem, but she does not see it ever happening. Vinnie claims he would be fine and while he wishes he could perform on the show, he is just happy being there. Blythe then offers to get some autographs from his idols.

Pepper insists she has an idea and she reveals a small shelf. She puts the remote onto it and she suggests they use it for the remote. She then asks Russell to act like Vinnie for a demonstration. She then states they will never lose the remote since she glued it to the table. However, Russell claims they cannot even use it, to which Pepper realizes something.

Blythe returns with the autographs while saying he can go and meet the judges. She even suggests he dances for them but when he does, they totally tell him off and criticize him for it. He returns to Blythe, heartbroken by the events, and then leaves.

Penny suggests they use a leash for the remote but everyone shoots this idea down. Zoe then comes by and claims she has dealt with it by ridding of the television. Russell then mentions that Vinnie gets violent enough when he cannot find the remote. After imagining how he may act without the television, Zoe goes to get it back.

Blythe finds Vinnie throwing away his autographs. He claims he is done with dancing since he will have to face facts and he is nothing more than a pet. When he asks Blythe about the outfit she is holding, she tells him she had hoped it would give her inspiration to create him a nice dance outfit, thinking that if he looked like a dancer the judges may take him more seriously. It is then one of the stage crew reviews who is dancing with who on her papers. The dancers all point out that the list is not right and realize their missing one of the dancers, who is on vacation this week. So now the one guy does not have a partner and they only have 5 seconds to dance. Everyone starts to worry and the woman sees Blythe and makes her enter as a dancer.

She asks for help, but Vinnie refuses, stating she should give it a shot since she used to dream about it anyway. But Blythe is beyond terrified, given the fact she cannot dance and hates cameras. Vinnie does not listen to her and leaves, standing in the pouring rain as he exits the building.

Back at the Pet Shop, they bring back the television and plug it in. Apparently, they need to reprogram it and Penny Ling goes into panic, thinking about Vinnie destroying the Pet Shop.

Vinnie walks through the rainy streets while sadly criticizing himself. He walks past a strange figure that stops him and brings him to an alleyway filled with dancing lizards and what-not. The guy makes them stop, introducing them to Vinnie. They ask to see him dance and everyone then joins in and they all perform and dance together. He realizes how badly he messed up, leaving Blythe behind when she really needed him to face her camera problems and the others help him try to get back before she has to perform. Blythe continues her panic attack until noticing the EXIT sign nearby. She tries to leave, but gets caught by the stage woman from earlier, who asks if she is ready to go on soon. Blythe tells her no, but she does not listen.

Vinnie arrives with his new friends and apologizes for leaving her behind the way he did. He then questions her hair, but she informs him before stating she doesn't know anything about dancing and needs help. Vinnie assures her he has it covered and it is soon time for Blythe and her partner to go on. As Blythe worries about her performance, it is revealed that Vinnie was hiding under her dress. He plans to help her dance without anyone seeing it.

Meanwhile the pets have somehow managed to figure out how to get the television to work. Unfortunately, it is not in a language any of them know. They try to fix it until they see Blythe on the show and watch her dance. Even her father is shocked to see her. They go fine until Vinnie struggles to hold Blythe up properly due to the weight difference. Somehow, they manage to dance fine and everyone starts to cheer her on. Even the judges seemed pleased and Blythe manages to win the show, getting straight 10s.

Her father congratulates her and starts to gloat to others. After he leaves, Blythe thanks Vinnie for his help, then mentions that she forgot all about the cameras because she had been focused on the plan. The stage woman comes by to congratulate her too and asks if she wants to join the cast. Blythe refuses, saying that they have to get back to home and they take off much to the stage woman's dismay.

Back at home, everyone watches as Blythe dances from the recording of the show. Vinnie claims he could watch it a lot and Pepper points out they managed to record it, then she slowly walks away as an angry Russell approaches to see they had deleted his favorite episode of his show and gives chase. 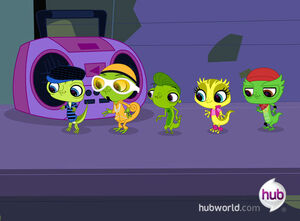