The Soul Patches, Jason #1, #2, Hayden, Dustin, and Ted, are a popular boy band. They first premiered in If the Shoe Fits.

In their debut episode, the Soul Patches played at the Biskit Twins' mansion for their party. At the end of that episode, the band, along with Zoe, preformed the song that Youngmee wrote.

The Soul Patches returned in It's the Pet Fest! - Part 1, where Blythe found out that Jason #1, was staying in Downtown City to help raise money for the Endangered Animals Fund. After asking him, Jason #1 agreed that the Soul Patches would play at the Pet Fest. 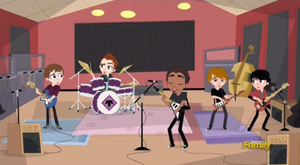 Retrieved from "https://lps2012.fandom.com/wiki/Soul_Patches?oldid=63960"
Community content is available under CC-BY-SA unless otherwise noted.