Speedy Shellberg is a 150-year-old tortoise who only appeared in The Tortoise and the Heir.

Speedy is a old tortoise that came to stay at Littlest Pet Shop while his owner Mr. Jones was moving into a new house.

When Blythe told Roger about him, it turned out he was once the pet tortoise of Blythe's mother Lauren, who went by the nickname Betty. 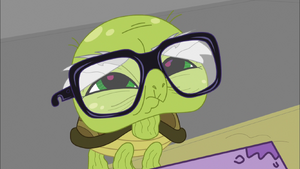