Standup Stinker is the twenty-fourth episode of the second season of Littlest Pet Shop and the fiftieth episode overall.

Pepper feeds Blythe jokes at a standup comedy contest, while the other pets concoct an elaborate plan to make Minka believe she really is the first monkey to land on Mars.

Over a month before this episode aired in the United States, it aired on United Kingdom on March 3, 2014. 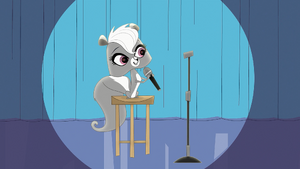