Sue Patterson is one of Blythe's best friends that she met on her first day of school, along with Youngmee Song and Jasper Jones.

Sue is described as a "jock" by Blythe. Indeed, she does seem to have a knack for sports. Sue has also shown to be passionate and a little easy to frustrate sometimes. She seems to take things more seriously than others would; this is shown when Blythe temporarily befriended the Biskit Twins in Penny For Your Laughs.

It is shown in Russell Up Some Fun that she also idolizes Blythe when she tried to emulate her. However, in the end, Sue learned to be happy with herself instead of imitating Blythe.

Sue has a slim athletic build, being the tallest of her friends, with fair skin and bright, sky blue eyes. She has peach lips and orange-brown eyebrows. Her hair is bright orange and a little messy, worn with a few yellow hair clips.

Sue usually wears a yellow short-sleeved shirt with a white T-shirt underneath, red trousers with a number 5 on her pant leg, and blue trainers. 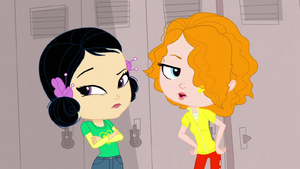