Summertime Blues is the twenty-sixth episode of the first season of Littlest Pet Shop.

Blythe has to cope with the anxiety of leaving her family and pet friends behind when she is accepted to spend the whole summer at the junior program at a fashion camp.

An ecstatic Blythe runs into Littlest Pet Shop one day and begins to bounce all over the room while the pets watch. They do not understand what is going on, but think it looks fun and follow her until Mrs. Twombly comes in to ask what they are doing. There, Blythe explains that she got accepted to attend a special fashion school upstate, and if she does well there then she may end up just studying fashion for her entire life from this point on. As she mentions how long she will be gone, Blythe then takes off while Mrs. Twombly slowly, sadly follows. Besides her, the pets are all suddenly saddened.

Russell tells the others not to panic since he thinks he can get all of the information needed then. He claims it probably is not as bad as they all think.

Meanwhile, up in their apartment, Blythe has been showing Roger the pictures of the place she will be staying. She is very excited, and unaware of how saddened he is also. She then realizes she never asked him if she could go and while he is not that sure, he could not stand to see her sad, so he agrees to it.

With that, Blythe takes off just as Mrs. Twombly arrives to speak to Roger. She tells her plans of keeping Blythe home, but Roger informs her that all of her plans are not very reasonable. He thinks the right thing to do is to just support her and her dream since she will only be gone for the summer. However, they do both agree they cannot imagine the pet shop without her.

Later on, Blythe is discussing the news with her friends. She mentions to them it is really far away by car, or short by plane. This upsets Jasper since she will be gone for most of the summer, but Youngmee and Sue yell at him for it.

Russell returns to inform the pets of what is going on. While the news is not bad, it is not that great either. They all realize while they will still have Mrs. Twombly and care about her, she is not as fun as Blythe. However, Russell tells them to calm down since they should all be supportive instead. He suggests they throw a going away party.

The following day, Youngmee, Sue, and Jasper exit school, all excited for the start of summer until they suddenly remember Blythe will not be with them. However, Youngmee reminds them they should not tell Blythe how much they miss her out of concern that she might feel bad for leaving them.

When Blythe joins them and sees the tickets they have to a fun theme park, she gets pretty excited until remembering she will not be there either. The others convince her she should not even be concerned over them when she asks if they will miss her. They take off after assuring her she will have a lot more fun then them since she actually is going to a place known as "F.U.N." However, this leaves Blythe feeling a bit sad.

Back at the pet shop, Blythe walks in and begins to clean while noticing all of the pets acting strange. She apologizes to Zoe for not getting to work on her summer fashions, but Zoe claims not to care. Vinnie proceeds to tell her she should go to the school and have fun, not even thinking or worrying over them.

Russell then pulls out a clipboard to ask them what they plan on doing for the party. Pepper wants to put on a comedy show while Sunil plans on performing, Zoe wants to sing a new song, Vinnie wants to dance for her, and Penny Ling was hoping to do a ribbon dance for them. After Minka reveals her painting for Blythe ideas, Russell suddenly stops to realize that he was the only pet not to think up anything yet.

As Blythe walks int othe main room, she is introduced to a girl named Madison. She will be taking her place for the summer and Mrs. Twombly reveals she did a search to find the perfect replacement. Blythe then tells her to follow after her and she runs up ahead to ask the pets to make a lot of conversation with them. She wants to see if she can understand them, but it turns out she cannot, which calms Blythe down a bit.

Later, the pets are all busy practicing. Since Russell is not that sure of what to do, he decides to just review everyone else instead. He makes a lyric suggestion for Zoe and tells the rest to practice while Minka assures him she will be finished in time.

By now, Blythe goes over the Zany Island grand opening using her laptop. She starts to reconsider heading to fashion camp when her father walks in with a lot of camp items. She thanks him for the help before telling him how much she will miss him. He promises they can talk on the phone, email each other, and also write letters. Before leaving the room, he tells her to make sure she gets to bed soon since they need to go very early in the morning.

With that, Blythe runs into the pet shop and sees how strangely dark it looks. Russell approaches and has her take a seat right near a stage they set up. All of the pets begin to perform for Blythe.

After they finish, Minka reveals the special painting she made for Blythe. Which consists of nothing but splashes of color. Russell admits he did not have anything to make or give to Blythe, but since he set up the party, Blythe is happy about that. He then reminds them Blythe will only be gone for a little while and when her father calls, she gives them all one final goodbye before heading out into the main room.

There, Mrs. Twombly reveals she set up a web camera for Blythe so she can watch the pets whenever she misses them. As she leaves the building, she says goodbye to her friends, who all assure her they will not be doing anything fun anyway. However, she does not buy it and promises to talk to them whenever she gets a chance and then takes off.

At the airport, Blythe reveals a list of things she wrote for her father to do, such as throwing away old food, watering the plants, and other things. However, before she can say anymore, she sees the bus for fashion camp. However, her father assures her to concentrate and have fun at camp and stop worrying over everyone else. He then says goodbye to her and she leaves for the bus while telling a rude bird she heard what he said, much to his surprise.

Blythe: Thank you, Russell, I think I'll miss you most of all. 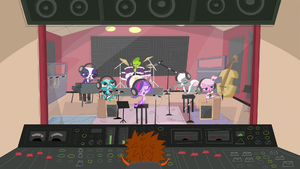