Sunil's Sick Day is the twenty-second episode of the second season of Littlest Pet Shop and the forty-eighth episode overall.

When Sunil and Vinnie have a falling out, it is up to Blythe and Russell to figure out how to get these two best pals back together again.

The episode starts with the phone ringing in Littlest Pet Shop. When Mrs. Twombly answers the call, she receives sad news about Sunil being sick and having to stay home for the day. That conversation was overheard by Zoe, who does not waste time and go straight to the other pets, saying she has a secret to share with them. She does so by playing a broken phone game with them, which starts with her whispering, "Sunil is sick" to Pepper and ends with Penny Ling receiving the message as "Cyril McFlip."

Meanwhile, being still on the phone with Sunil's owners, Mrs. Twombly asks Blythe if she could babysit Sunil for the day, which she gladly agrees to.

Once it becomes clear that the message was "Sunil is sick," the pets get scared of Vinnie's reaction to the news. At that exact moment, Vinnie walks in and the pets soon find out he does not really care if Sunil is not coming to the day camp for the day, which is suspicious since Sunil and Vinnie are best friends.

Meanwhile, Blythe is taking good care of Sunil at his owner's apartment. However, when she asks him if he has got his sickness from someone, he becomes enraged, saying if by someone she means Vinnie, then most certainly not. He goes on about how he cannot hear a thing about Vinnie, and Blythe gets a very clear idea that something has happened between Sunil and Vinnie.

Russell soon gets the same idea when the pets decide to play a game of pointing out what they like about Sunil and it upsets Vinnie. So he puts on a detective costume and takes a detective name Cyril McFlip, vowing to get to the bottom of what happened.

Blythe and Russell try the different ways of getting the story out of Sunil and Vinnie. As a result, they get two different stories, each one is highly embellished by the teller. However, Russell does not give up and keeps searching for clues until he finally puts the pieces together.

Ultimately, Sunil and Vinnie confirm Russell's version of what has happened and apologize to each other, becoming best friends again.

Blythe: What do you think made you sick? Did you catch something from someone?
Sunil: If by someone you mean Vinnie, then no. I would certainly did not catch it from him. He would never give me anything.
Blythe: Okay then. I actually wasn't thinking specifically about Vinnie.
Sunil: Vinnie this, Vinnie that! Could you please stop talking about Vinnie already?! (shoves some mangoes into his mouth with a frown) 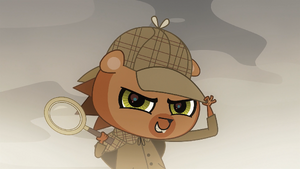