Sunil Nevla is a mongoose with a talent for magic. Usually, his magical tricks come in handy and can really wow the crowd, but he sometimes messes up, and apparently explosions are semi-common of his tricks. He is best friends with Vinnie Terrio.

Sunil is a very crafty mongoose who loves magic. He is often shown to practice it, or may use it when it would come in handy. However, he is also very cowardly and even admits this as his most common of all faults. The others care deeply about him and he knows this, but it sometimes is not enough to make him face his fears or worries. He also dislikes the thought of love, but this is stopped temporarily when he is put under a love spell (by Sugar Sprinkles) and falls in love with Pepper. However, at the end of the episode, Sugar Sprinkles reverses the spell (due to the boys in disco suits, in which she says, "Okay, that's just wrong."), and he drops Pepper (who he was holding) in disgust.

He panics very easily, but when cobras appear (real or imaginary), he immediately turns strong and competent and is able to do the job right. This is due to mongooses like him feeding on snakes. Blythe and Russell use his natural hatred of cobras to give him the confidence to help rescue the remaining pets (Zoe, Penny Ling, Pepper, Vinnie, and Minka) from their imprisonment within the Largest Ever Pet Shop.

Despite his timidity, Sunil has a pretentious side, such as when he boasts about Jasper getting his voice correct when it was an inaccurate deep voice in Commercial Success and tries to prove himself to be an excellent painter in Two Pets for Two Pests. However, he eventually loses this side of him.

"Want to make something disappear? Then Sunil is your man, um, mongoose. Sunil loves putting on a magic show and sometimes his tricks actually work... well, sometimes."

Sunil Nevla was designed by Hasbro designer Kirsten Ulve in 2011.[2] One of her original illustrations shows Sunil had wider hips, no hair tuft, and wore a pocket watch.

Sunil is tall, blue, with a small segment of lighter blue hair, muzzle, and tummy / chest. He also has light blue on the bottoms of his paws. His eyes are bright golden colored and he has a tiny pink-red nose. He has dark blue stripes on his back. The inside coloring of his ears are very dark blue.

Sunil: Hold on! We're supposed to walk into the Largest Ever Pet Shop, get past a spiderweb of lasers, disable a very expensive robot security guard and two mean girls, enter a day camp area made of half-inch plexiglass and walk out with Zoe's sister?! (Gailbreak!)

Sunil: My psychic abilities are telling me this might not turn out so well. (Blythe's Crush)

Sunil: Oh, what can I say? Musical theater was never my strong suit. (Dumb Dumbwaiter)

Sunil: Wha-what are we? Magicians? Well, odd that I would ask that question.

Sunil: Perhaps we should take her to the veterinarian. (What Did You Say?)

Sunil: What do they go to? A humanarian? (What Did You Say?)

Sunil: I am the doctor! (Frenemies)

Sunil: Ewww! That is so gross! (Secret Cupet)

Sunil: I am scared of creatures with six or more legs, loud noises, curtains, avocados and quiet jazz music. But no, not cobras. You will not hurt these raccoons.

Russell - Sunil has a brotherly relationship with Russell.

Vinnie - Sunil and Vinnie are best friends and do almost everything together. In Sunil's Sick Day, they have a falling out, but they manage to clear things up and become friends again. In In The Loop, it was shown they have been best friends since they were young.

Blythe - Like all the other pets, Sunil has a wonderful friendship with Blythe.

Pepper - Sunil and Pepper's relationship is not shown much throughout the series. However, in Gailbreak!, they dance together. In Secret Cupet, Sugar Sprinkles' song affects Sunil and he falls in love with Pepper due to her being "the first pet that he sees." At the end of the episode, in the Sweet Delights Truck, he, Russell (who fell in love with Penny Ling), and Vinnie (who fell in love with Minka) corner the girls and try to advance on them. Sunil holds Pepper by the hand and waist and almost kisses her. When Sugar Sprinkles reverses her spell and Sunil snaps out of it, he exclaims, "Eww! That is so gross!" due to him almost kissing Pepper and drops her on the floor.

Delilah - He was in love with Delilah, but she did not show the same affection in return, only occasionally teasing him. She had visited Littlest Pet Shop only once, so their relationship did not have much chance to develop into something bigger. Moreover, during the evens of Pitch Purrfect, he is disappointed with Delilah for stealing Zoe's song and says he is starting to find her "slightly less alluring". 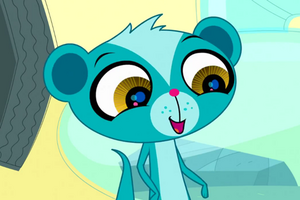