Sweet (Truck) Ride is the sixteenth episode of the first season of Littlest Pet Shop.

Blythe rescues the pets when they accidentally send the truck careening down the street. After she gets blamed for the incident, the pets decide to film a reenactment.

Blythe and Youngmee are waiting for Aunt Christie, who is bound to soon be back from the local car dealership with a car for Sweet Delights. The girls each fantasize about what model it will be, but are left disappointed when the car turns out to be a food truck. Soon enough, the girls are cleaning the sweet truck when Roger walks by, with a stuffed dummy as his partner. It turns out that Roger is practicing for the three-legged race: An event that he has a legacy in.

Inside Littlest Pet Shop, everyone is checking out the truck and the bundles of goodies that are being shipped on board. Soon enough, Buttercream hops into the shop, asking the other pets if they want to check the truck out. Though Russell is hesitant to do so (being a rule follower), the others gladly run straight through the doors (and over Russell) to get a better look at the treats, with Russell in pursuit.

Blythe allows the pets into the truck, but tells them to not drive off. Though Blythe knows all too well that the pets will not drive, she has no idea of the events that are to transpire soon afterwards. As she and Youngmee enter Sweet Delights, the two begin to fantasize of the freedom of finally getting to drive. Though Youngmee prefers a convertible, Blythe does point out that the food truck has its own perks – actual treats.

Inside the truck, the pets are quickly introduced to Sugar Sprinkles, an extremely mellow cat with a knack for playing the ukulele and enjoys sleeping inside of a bin of sugar sprinkles (hence her name). Everyone is introduced and everyone gets a taste of sprinkles in an especially unique way. After this occurs, Russell comes across other features in the truck and after a chain of events, Buttercream falls onto the lever, making the truck go driving off.

The pets try to figure out what is going on and Blythe runs outside to find the ramp attached to the truck's trunk on the ground. As she tries to find it, she hears a commotion nearby and sees it flying down the street. She trades a young girl for her little bike and takes off behind it. The pets continue to panic and try to get the truck to stop, but Pepper accidentally accelerates the speed while Vinnie tries to steer. The only one in the group not panicking happens to be Sugar Sprinkles, who compliments Vinnie on his dancing. The others continue to try to get the truck to stop by messing with other handles and food pedals. Thankfully, Blythe manages to catch up and straps on the seatbelt before getting the truck to come to a sudden hault.

She asks the pets if they are okay before demanding to know what happened. Russell tries to explain while Youngmee approaches to ask Blythe what she did. Blythe tries to claim she did not do it, but a cop shows up to ask about the incident. Blythe claims the pets did it, but is unable to tell him what truthfully happened and is given a ticket – something Roger is less than happy about.

Once again, Blythe claims she did not do it and it was the pets instead, but as much as he wants to, he does not believe her and finds it too hard to believe. She refuses to tell him how she knows though, so he grounds her and asks for her smartphone. He also grounds her from attending the father-daughter picnic and takes his leave. He also wants her to re-bake everything destroyed in this mess.

Blythe helps Aunt Christie and Youngmee bake, but neither of them believe her when she tells them the pets did it. After Aunt Christie leaves to go to another room, the pets come inside to watch Blythe and Youngmee. Blythe feels bad about the turn of events, but Youngmee tries to convince her it is okay and the pets go back to the pet shop.

They all feel really bad for Blythe, but do not know how they can help her. When Zoe mentions a wish for everyone to have seen what happened, this inspires Russell and he suggests they film a reenactment of the event to prove Blythe's innocence. If they use her phone, they can leave it for Roger and Aunt Christie to see.

The pets sneak into Blythe's phone and see Roger standing in the kitchen near it. They decide they need to find a way to sneak in and grab it without being seen. A few of them move the doll Roger was using to train, which makes him suddenly full of energy and he runs off. They then swipe the phone and take off for the Sweet Truck, where they find Sugar Sprinkles. She is happy to see them, but she does insist they do not try to drive again. Russell explains why they have come and they need her help for it.

Everyone runs to where they had been previously, but they all make it rather difficult to get the job done – Zoe acts like a diva with her costume, Vinnie wants to fix his dance, and Pepper is practicing her humor. Russell scolds them and tells them they need to focus and help Blythe while he tries to get the phone to begin recording. But in his confusion, Russell accidentally dials Aunt Christie, who can't understand him and he quickly hangs up.

He tries again and luckily manages to get it. However, the pets once again act up, with Minka's tail getting in the way, Zoe's outfit being ripped off, and Pepper messing up her lines, which makes her and Zoe burst out laughing. Sugar Sprinkles tries to get Russell to feel better, but when he throws the object he was holding another chain reaction gets the truck going again.

This time, Russell does manage to get the recording, but they now have to try to stop the truck again.

As Roger runs by, he happens to see the Sweet Truck go by and steals a little girl's bike to try to stop it. He manages to get inside, like Blythe did and brings it to a stop. But he is quickly assumed to have drove it by the cop and given a ticket.

However, it works out in the end. Blythe is able to prove to her dad that she didn't do it and she is un-grounded. So they go to the father-daughter event and begin to ready themselves for the three legged race. Roger apologizes for not believing her, but Blythe claims it to be fine while they line up with the other contestants in the race.

Nearby, Aunt Christie is selling the cupcakes from the incident. Youngmee explains that because of what happened, she figured they oughta make the best of it and it seems to go over really well with the customers. As they laugh, Sugar Sprinkles pops out of her hiding spot to comment on how she knew everyone would find this funny. They then watch as Blythe leads the race with her father and the episode ends.

Buttercream: Ooh! We've got everything you'd ever need to make sweetsie-treatsies in these handy-dandy-don't-call-me-Andy, lock-down bim-bada-bins: Flour, sugar, frosting, and [winds up]... sugar sprinkles!
Sugar Sprinkles: [Pops out of nearby bin] That's my name! Don't wear it out.

Blythe: That is exactly right.
Roger: How could you possibly know that? 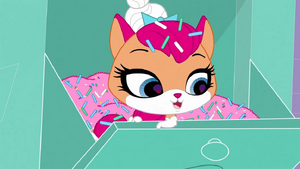