Sweet Pepper is the sixteenth episode of the second season of Littlest Pet Shop and the forty-second episode overall.

Pepper is smitten with a visitor to the day camp, but has no idea how to express herself around him. Meanwhile, Blythe has her hands full babysitting Buttercream while trying to finish reading a new book.

Blythe enters Littlest Pet Shop's day camp to feed the pets while being clearly lost in the book she is reading, so she does not even notice the door and bumps into it. During their feast, the pets ask Blythe about it and find out that the book – Famished Fest – had been made into a movie, which was going to open that night, so Blythe was trying to finish the book before she could watch it with Youngmee and Jasper. With that, Blythe walks away, leaving pets with Mrs. Twombly, who introduces them to the new day camper: Captain Cuddles. He is an European polecat and happens to have some very good manners, which he demonstrates immediately by calling Mrs. Twombly "the pretty lady" and politely introducing himself to the other day campers. Every pet greets him, except Pepper, who gets instantly dazed and lovestruck. Not knowing what to do with those obviously new feelings to her, she hits Captain in the foreleg and dashes away. Surprisingly, Captian Cuddles finds her being a "strangely fascinating creature" after such a gesture and falls for her.

Meanwhile at Sweet Delights, Buttercream was desperately trying to get Aunt Christie's attention, but fails miserably as the business woman is constantly on the phone and busy with yet another baking. Frustrated, Buttercream leaves for Littlest Pet Shop. That day was the day for the Fire Hydrant Slide to be occupied by two sad pets at once: Pepper, upset about not being able to sort her feelings towards the new day camper out, meets Buttercream there. One word leads to another and bunny finds out that Blythe comes back home early that day, so she decides to ask her for a "quality human time". That makes at least one pet's problem solved. When Blythe enters Littlest Pet Shop to use the dumbwaiter to get to her room, Buttercream tells her about how much a human time is needed, forcing the girl to agree with her big puppy eyes. For the rest of the day, Blythe is getting torn between trying to finish the book and babysitting the bunny.

Meanwhile, Zoe, Minka and Penny Ling try to help Pepper to become girly, assuming that will make Captain Cuddles like her. They teach her everything, from how to behave to when to laugh. They go way overboard, and Pepper's mind locks, causing her to become the very definition of a stereotypical "girly girl", which is highly unnatural for her. Seeing such change does not impress Captain one bit, but pushes him away instead.

Blythe does a great job at giving Buttercream the human time she needed so desperately, so the bunny asks her to be her owner instead of Aunt Christie, accusing the latter of not even noticing her. Ironically, at that exact moment Blythe's phone rings and she answers, only to find out it is Christie, who wants her to bring Buttercream back. Blythe tells her that she "had a feeling" that the bunny needed some human time, and Aunt Christie remembers that the last time she played with bunny was two days ago. She cancels all the appointments and dedicates the rest of the day to Buttercream. However, as Blythe brings Buttercream back to Sweet Delights, Aunt Christie unintentionally spoils to end of the book Blythe was never able to finish reading.

Upset with the results of her attempt to be girly, Pepper tells Blythe about her feelings and gets a wise advice: to be girly in the way she wants to be girly. She goes ahead and re-introduces herself to Captain Cuddles and they hit it off perfectly.

Russell: Blythe, that must be some book!
Vinnie: Yeah, 'cause it's giving you some bump. 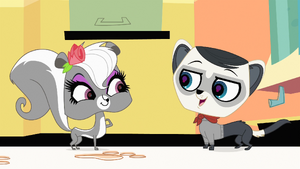