Tail-Rave-Ium is the first Littlest Pet Shop animated short published by the Hasbro Studios Shorts YouTube channel on May 30, 2014. It was directed by Joel Dickie, written by Julie McNally Cahill and Tim Cahill,[1] and storyboarded by Steven Garcia.[2] Daniel Ingram wrote the lyrics[3] and Elaine Shepherd sang the song.[4] According to composer Daniel Ingram, the short was inspired by the Toy Story short Partysaurus Rex.[4]

Blythe is taking the pets to the park and calls Vinnie, but he prefers to stay and practice dance moves. He tries his Big Finish, but hits the floor with his face.

Vinnie says he will never get this move done. Just then, L-Zard arrives, his crew coming along with a shelf stereo. Vinnie excitedly asks what they are doing there, to which L-Zard replies that they came to visit him to get their dance moves on. When Vinnie is about to say his dancing days are over, L-Zard stops him and starts a rave, with Christmas lights and glow sticks.

The lizards are all amused by the rave. However, when Vinnie manages to perform his Big Finish, his tail falls off, shocking the gang and shaming himself. His tail then starts to wriggle around to the music, which gets the crew's interest. They all let their tails fall off and wriggle in a circle and the rave goes on. 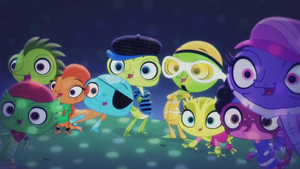